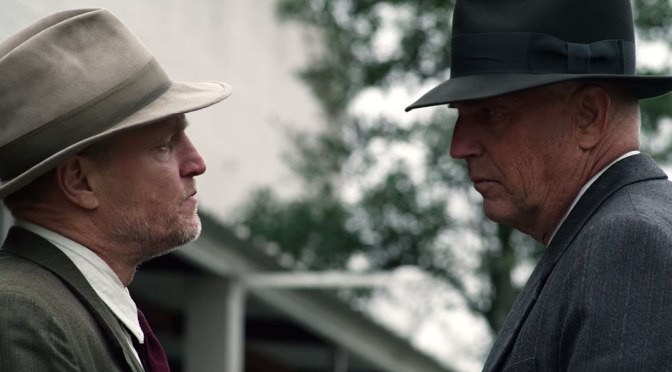 Netflix’s The Highwaymen reminds us who the bad guys are.

Netflix’s The Highwaymen centers on Frank Hamer (Kevin Costner) and Maney Gault (Woody Harrelson), and their work to hunt down the notorious Bonnie & Clyde. Usually when we see the two infamous criminals, they’re portrayed in a more forgiving light. They became well known for robbing banks at a time when the country was still recovering from the Great Depression. But their misdeeds were more than just playing Robin Hood at some banks. These two criminals killed at least 13 people, sometimes in very brutal ways.

The film doesn’t shy away from the brutality of Bonnie and Clyde’s actions. If anything it lifts them up as a way of explaining how these two- and their gang, were truly criminals. But the film also dabbles in exploring the grey areas of police work as well. Harrelson’s Gault is haunted by his time as a Texas Ranger, and in the third act explains a brutal encounter with murderous bandits. Hamer isn’t clear here either, at one point explaining to Clyde’s father Henry Barrow (William Sadler), that he dreamed of being a priest, but changed course as a teenager when he killed a man who turned out to be a criminal. Director John Lee Hancock (Saving Mister Banks) and writer John Fusco (Young Guns) do their best at every turn to show that there is darkness and light in all of us, and we must do our best to straddle the line between the two.

The performances by Costner and Harrelson really sell the film’s themes, and help keep the film steady. This isn’t an action packed film, though it does have some tense moments- it’s much more of a slow burning crime thriller. It’s focused on character, and the ways in which humans react in these situations. The film takes it’s time with long stretches of dialogue that help define who these people are, and why they are following the path they’re on. It also works hard to play out the mystery/detective aspects of the story, as Hamer and Gault work to not only catch up to Bonnie and Clyde, but get one step ahead of them.

In a way the film feels similar to another Costner movie, The Untouchables. We have an antagonist who is beloved by the public and media for being a famous charismatic outlaw. We have some lawmen who can’t seem to get ahead of the outlaw. The lawmen keep getting pushed back at every turn. In the end the lawmen use the naiveté of the outlaw to catch them and bring them to justice. Plus Kevin Costner leads the film, and reminds us that he looks good in a suit.

Overall the film is much better ride than one might expect. It has touches of almost every kind of dramatic genre: crime, thriller, buddy cop, mystery. It features a stellar cast, including Kathy Bates as Governor Miriam “Ma” Ferguson- the first woman ever elected Governor of a State. The dialogue is sharp and compelling. It’s wonderfully shot and scored to keep you dialed in at every turn. And the performances by Costner and Harrelson are truly phenomenal. Harrelson’s work alone is some of his best yet, and feels different from almost anything he’s done before. The film is a great two hour or so ride, and one that may help you escape the world for a bit.

The Highwaymen is currently streaming on Netflix.