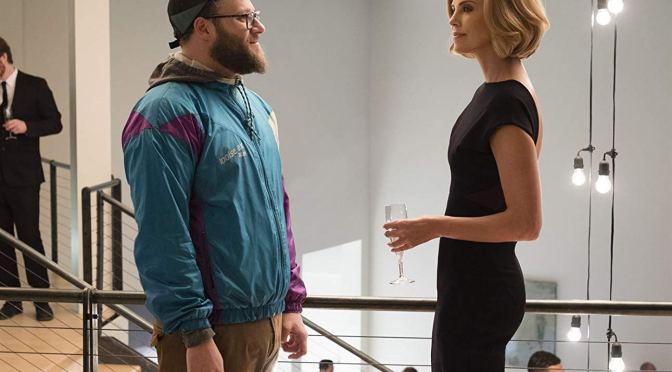 In honor of President’s Day we’re taking a look at one of our favorite films of the past year featuring the ins and outs of politics and a presidential campaign, Long Shot.

The romantic comedy Long Shot stars Charlize Theron as Secretary of State Charlotte Field, an up and coming politician who plans to run for President. Field hires her childhood friend Fred Flarsky (Seth Rogen) as a speech writer to help add some levity as she begins work on a climate deal that will be a major step towards announcing her candidacy. As Charlotte and Fred grow closer they begin to fall for one another, but they realize that their relationship needs to be kept under wraps because it may not look good to voters. The two work together to boost Charlotte’s popularity and find ways of being closer while still keeping their relationship hidden from the public.

The film is directed by Jonathan Levine, the critically acclaimed writer-director of 2008’s The Wackness. Levine’s credits also include the Seth Rogen films 50/50 and The Night Before, and this film fits in well with his collaborations with Rogen. This isn’t a film that follows along the way you expect it to. Theron plays Charlotte completely straight forward and honest. She’s not the type of character that you’d expect from most big Hollywood films where a woman is running for president. She’s an honest portrayal of a real woman. Someone who is layered, complex, and isn’t a one note love interest. This is just as much about Charlotte as it is Fred, and the film does a great job of showing that.

One of the highlights of the film is how well it truly expands both characters, and shows you why they could fall for each other. Yes, at first glance you see Seth Rogen and Charlize Theron, and may think it’s a funny pairing. But these characters are people who love the same things, and underneath the shell of their day jobs (secretary of state and gonzo journalist), they have the same beliefs and ideals. You see the chemistry between them before they even see it, and it makes the relationship an easy sell- and something that you want to succeed.

The film also features a stand out supporting cast, including June Diane Raphael, Ravi Patel, O’Shea Jackson, and a fantastic and surprising turn by Andy Serkis. Their performances all help build up Theron and Rogen, making them both stronger and more loveable throughout. The chemistry between Rogen and Theron is also incredibly beautiful and charming in a way that brings complete joy as you watch their relationship bloom. Overall Long Shot is a great rom-com that will become a well-loved classic of the genre as time goes on.

Long Shot is currently streaming on HBO and is available on DVD, Blu-Ray or Digital.