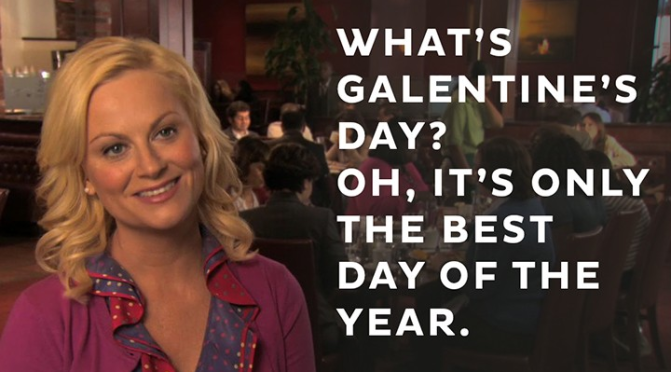 The ladies of Poor Man’s Spoiler have put together a perfect list of films to celebrate Galentines Day.

Whether you’re single or taken, Galentine’s Day is a time to celebrate your lady friends. Grab your gal-pals, some wine, and some tissues because you’re going to need them for our Best Galentine’s Day Films list of 2019.

Together they must track down a drug dealer in Boston and despite their vastly different personalities – and Ashburn’s reluctance to work with Mullins – the pair end up bonding by the end of the film. For any gals who enjoy action coupled with strong female leads, this is a great movie to start with.

On Wednesdays we wear pink.

Okay but seriously, if any women have not seen this film at least once, please do me a favor and watch it. Released April 2004, Mean Girls starts with home-schooled, 16-year-old Cady Heron (Lindsay Lohan) returning to the US to attend public school in Evanston, IL.

From there she falls into a world of cliques and popularity and loses favor of the school’s queen bee, Regina George (Rachel McAdams). Eventually, in Cady’s attempt to cut Regina off from her popularity, she realizes she becomes Regina herself. As someone who isn’t into chick flicks/teen films, this movie was a staple of my teenage years. Every sleepover was usually filled with horror films and, of course, Mean Girls.

Even at 25 I’m still quoting this movie because it brings back memories of high school drama. Not to mention, Mean Girls made it to Broadway, and who doesn’t want to see a musical by Tina Fey?

A League of Their Own

For any gal-pals who enjoy baseball with their feminism, A League of Their Own takes the cake. Despite having been released in 1992, the film still has relevance to women still overcoming adversity today.

The film focuses on sister-duo Dottie (Geena Davis) and Kit (Lori Petty) who are recruited to join a women’s baseball league in this fictional storyline about the All-American Girls Professional Baseball League, a league formed during the beginning of World War II to keep baseball relevant during the war. The league, managed by Jimmy Dugan (Tom Hanks), is initially seen as a joke, but after a photographer publishes a magazine cover with Dottie doing the splits while catching a ball on home plate, fans begin filling the stands.

The two sisters join up with several other women on the Rockford Peaches baseball team but are eventually split up due to their growing rivalry and differences. Kit, as the younger sister, feels compelled to prove herself better than Dottie even when Dottie isn’t trying to outshine her little sister.

Even though I never had a sister, and my brothers probably encouraged my love of baseball, I love this film for featuring this sibling rivalry that anyone can understand and for a whole league of women hell-bent on proving their worth to the men who didn’t think the women’s baseball league would work out. 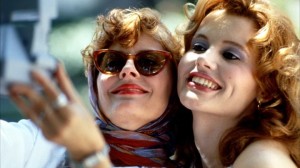 It’s set up to be your typical best friend road trip for a weekend at a fishing cabin in the woods, but Thelma and Louise quickly turns into two best friends escaping from the law. The film, released in May 1991, is a thrilling story of two very different gal-pals working together to evade the law and the many men they encounter.

After stopping at a bar, Louise (Susan Sarandon) finds Thelma (Geena Davis) nearly being sexually assaulted by a man she was dancing with and stops him by threatening to shoot him. While walking away, the man doesn’t stop making crude comments, and Louise shoots him. This takes them on a run from the law, believing that no one would believe their story of self-defense from Thelma’s sexual assault.

The story features several instances where the two women are being verbally/sexually attacked by men, but they both stand together until the very end. The end makes a surprising leap, but I’d still venture to say Thelma and Louise are friend goals in the way that they look after each other throughout their adventure. 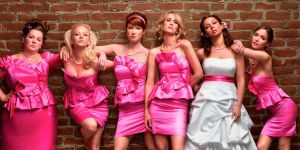 Released in 2011, this film screams gal-pal worthiness by its own name. Long-time best friends Lillian (Maya Rudolph) and Annie (Kristen Wiig) experience a series of ups and downs as they plan for Lillian’s wedding while Annie’s life is simultaneously falling apart. As debauchery ensues, and Helen (Rose Byrne), the beautiful and elegant wife of the groom’s boss, fights for Lillian’s attention using her financial status, Annie is soon asked to step down from maid of honor.

The two best friends reconcile their friendship by the end of the film, with the help from other bridesmaids Helen and Megan (Melissa McCarthy).

Anyone who is currently planning a wedding or has planned a wedding knows the stress and anxiety that stems from such an event. Sitting down and enjoying Bridesmaids with some of the gal-pals might help put to rest those concerns. Pour a glass of wine, pop some extra buttery popcorn, and enjoy someone else’s wedding planning drama.

The 1988 film Beaches follows the 30-year friendship of eccentric performer C.C. Bloom (Bette Midler) and suave Hillary Whitney (Barbara Hershey). They meet as children in Atlantic City where they quickly become friends. From opposite coasts, they remain in touch through letters as they grow up.

They reunite in New York as adults and become roommates, with C.C. still performing and Hillary working as a lawyer. Their friendship survives love triangles, marriages, and divorces, until a major argument drives them apart for a while. They reconnect again in California after some time passes, but things are different now, especially after C.C. chooses her career over domestic life and returns to New York.

The movie shows how women can love and support each other despite their differences and can maintain close friendships through jealousy and selfishness. If you’re not sobbing through “Wind Beneath My Wings” at the very end, you’re doing it wrong.

2001 saw the release of one of the most iconic feminist flicks, Legally Blonde. What could be more empowering than a strong, beautiful woman making her way through Harvard Law school out of pure spite? Elle Woods (Reese Witherspoon) shows that women are capable of being intelligent, ambitious, and glam AF.

After her boyfriend Warner (Matthew Davis) breaks up with her before heading off to law school, Elle decides that the obvious way to get him back is to also get into law school so she can show him that she is capable of being “serious lawyer’s wife material.” She experiences some culture shock and has a tough time adjusting to the demands of law school, but with the help of new friends Emmett (Luke Wilson), a licensed attorney, and Paulette (Jennifer Coolidge), a beautician, she begins to regain confidence and works to show Havard what she’s made of it.

After landing a spot in an internship for a high profile case, Elle really kicks it into gear, proving to all of her naysayers that she is more than just a dumb sorority girl. This films is a lighthearted rom-com that will inspire you to burn down the patriarchy with signature pink stationary in one hand and a tiny chihuahua in the other.

The film flashes back to the summer of 1970 when the girls are around 12 years old. They sneak into the local cemetery one night to do a seance, and believe they’ve summoned the spirit of  Dear Johnny, a 12-year-old boy who died 25 years before. They spend some time trying to learn more about the mystery of his death, but mostly the film shows the mundane side of their lives growing up together in a small Indiana town.

The girls grow apart by the end of the summer, but when they reunite as adults, they vow to see each other more often. This is a great film about some of the realities of being a preteen/teenage girl that any woman can identify with.

Based on Fannie Flagg’s 1987 novel Fried Green Tomatoes at the Whistle Stop Cafe, this 1991 film begins with Evelyn Couch (Kathy Bates), a woman in her 40’s who is feeling  stuck and defeated by life. She meets Ninny Threadgoode (Jessica Tandy) in a nursing home and begins visiting her regularly to hear her story about the Whistle Stop Cafe and the lives and friendship of Idgie Threadgoode (Mary Stuart Masterson) and Ruth Jamison (Mary-Louise Parker).

Idgie and Ruth were young women in Depression-era Alabama, and they bond after the death of Buddy, Idgie’s older brother and Ruth’s boyfriend. Years later, Idgie eventually opens the Whistle Stop Cafe in order to make money to help care for Ruth and her baby after she leaves the abusive man she married, Frank.

The film jumps back and forth between Ninny’s story about Idgie and the present-day where Evelyn can be seen growing more confident and enjoying life more and more with each visit to Ninny. Fried Green Tomatoes is a beautiful film about intimate female friendships and the lengths women will go to support their own. 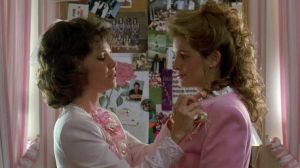 With one of the greatest ensemble casts in cinematic history, Steel Magnolias is a classic that is sure to get the waterworks going every time. The film focuses much of its attention on the relationship of mother-and-daughter duo Shelby (Julia Roberts) and M’Lynn (Sally Fields) as Shelby gets married and has a child while managing Type 1 diabetes.

Other characters include the salon-owner Truvy (Dolly Parton), Arnelle (Daryl Hannah), a beauty-school graduate that Truvy takes under her wing, former first lady of the town Claire Belcher (Olympia Dukakis), and the crotchety neighbor Ouiser Boudreaux (Shirley MacLaine), who delivers some of the greatest one-liners of all time.

This iconic chick flick shows some of the ordinary, everyday aspects of family, community, life, and love in a small Louisiana town. The film culminates to an ending that simultaneously breaks your heart and fills you with hope and love.

Written by Alix Teague and Amanda Creech
(Alix is a fan of memes, puns, and unironically using words like “yeet.” She also has an MA in literature, so she’s clearly putting it to good use. She likes to refer to herself as the Millennial Bard. Follow Alix on anything at @alixplainlater)
(Amanda specializes in sarcasm and the horror genre – mostly in literature, but also film, sometimes real life. She currently writes memoir and fiction in her spare time and maybe when she’s a big kid she’ll be famous for her writing – if anyone enjoys reading about the drama of a small town southern Indiana girl moving north. Follow Amanda on twitter at @A_Creech93.)