We close out our pre-Birds of Prey DCEU retrospective with the best of the bunch (outside Wonder Woman), last year’s Shazam!

After many major box office successes but being panned by fans and critics, DC struggles with creating their own cinematic universe. Wonder Woman was the one shining star amongst the group before last December’s Aquaman which appeared to show DC changing course. With their latest film, Shazam, DC not only continues to correct their course, but has delivered what may be their best film to date.

Shazam tells the story of Billy Batson (Asher Angel), a young foster kid who has been in the system since he was a toddler. Billy is selected by the Wizard Shazam, to take on his powers and be his champion. In doing so Billy is given the power of the gods: the wisdom of Solomon; the strength of Hercules; the stamina of Atlas; the power of Zeus; the courage of Achilles and the speed of Mercury. From then on Billy needs only say the name Shazam, and turns into a superhero version of himself, portrayed by Zachary Levi. Billy works with his new foster brother Freddy (Jack Dylan Grazer) to understand his powers and takes on the evil Dr. Thaddeus Sivana (Mark Strong).

Shazam delivers everything you could possibly want in a film and more. Every character is well developed, and every actor gives a performance that makes you fall in love with everyone involved. You feel for Billy and Freddy as they face their obstacles as both foster kids, and as they deal with their own personal issues. The film also does an amazing job with the villain, Dr. Sivana. It shouldn’t be a surprise as Mark Strong has always been an amazing actor. But the film does a phenomenal job with developing Sivana just as much as it does Billy, and honestly, he’s a joy to watch on screen.

The film is centered on the idea of family and how a family can build you up or tear you down. Without going into any major spoilers we see that Sivana and Billy are both defined by childhood trauma and difficult family situations. Billy yearns to find his real mother, while Sivana years to become everything his father told him he couldn’t be. The way they face these issues and overcome them or become corrupted by them, creates an interesting two-sided coin between the two characters. That being said, it’s never shoved down the audience’s throat.

One of the best aspects of the film is honestly it’s subtlety. There are continuous nods to things, be it a larger DC Universe, or connections between characters. But the film never screams these things at you. It constantly treats them just as it should, showing the audience or Billy that these things are there to establish a status quo and then just letting the film live there. There are times where things come in to play later on in the film, but it all happens naturally.

Even with acknowledging the film is part of the larger DC Universe, there are clever nods to the larger world of superheroes, it never feels like DC trying to expand their cinematic universe. Freddy is obsessed with superheroes, and those heroes just happen to be Batman and Superman, who are real in this world. But it’s an aspect of the film and his character that only ever feels like it’s there to help Billy in his training as Shazam. He’s able to work with Freddy and understand all of his new powers because Freddy is obsessed with superheroes and knows how this world works.

There honestly isn’t a single downside to this film. It’s hilarious from beginning to end, it’s got heart, it has characters that you’ll fall in love with and immediately want to see more of. Again, without going into spoilers, there are a few scary moments with everything surrounding Sivana and how he gets his powers, but it’s balanced well with the comedy of the film. Overall Shazam is a movie that any DC or superhero fan will love. It’s a love letter to everything we love about superheroes, and everything about it is firing on all cylinders. Shazam isn’t just a great superhero film, it’s a great film period, and will likely be considered one of the best superhero movies of all time.

Shazam is currently available on DVD, Blu-Ray and Digital. Be sure to keep following us throughout the week and into the weekend for all our DC and Birds of Prey coverage! 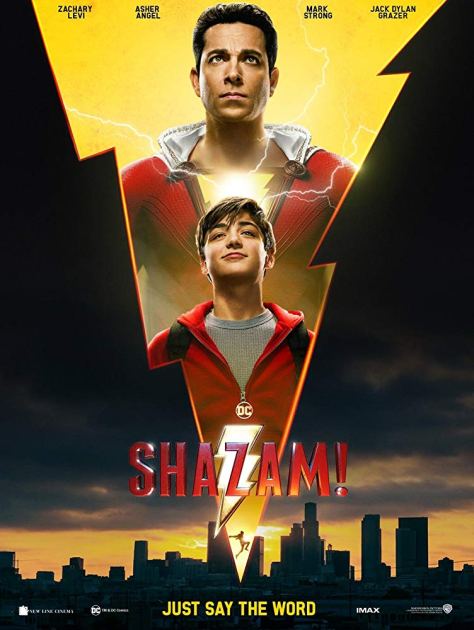