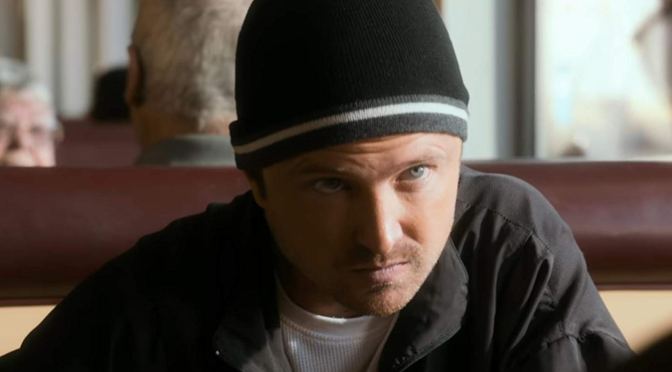 Netflix released the Breaking Bad film El Camino this fall, and we’ve got a spoiler free take on the film.

Breaking Bad is without a doubt one of the greatest shows ever created. The 62 episodes spanning five season, told the story of mild mannered chemistry teacher Walter White (Bryan Cranston), becoming a drug kingpin known as Heisenberg. Along the way Walter began a partnership with Jesse Pinkman (Aaron Paul), which had highs and lows marked by financial success and numerous murders. The main arc of the show is that of Walter’s turn from good to pure evil, but the change for Jesse is equally as important. If Jesse had remained the drugged up, slightly annoying meth cook, that he was at the start, it would have been a very different show. The show’s growth is incredibly reliant on Jesse turning into a better person as time went on. Or at least his attempts to become a better person.

It’s easy to forget all of the crazy things Jesse went through over the years. The show begins with him immediately losing his cooking partner and distributor, and by the end of the series he’s had one of his closest friends murdered, two girlfriends killed, his parents have abandoned him completely, and he’s lost most of the money he made. Jesse was a fundamental aspect of the show because he gave us the antithesis of Walter White. He was who we expected to see when we saw someone who cooked meth, and through all the torture he experienced as Walter White’s business partner, he somehow became a better person. When the series ended and Jesse drove off in that El Camino, we hoped he would have a better future, one filled with peace.

El Camino shows us where Jesse went moving forward. It gives us a definitive answer for how his story ended. Most of the film is set up without us knowing what exactly Jesse’s next moves are. We see him silently going through the motions of a plan he has to escape the shell of a life left around him. We get small moments with many of the extended cast of the series, people who were directly connected to Jesse throughout. We even get nods to the women Jesse loved, and the family that abandoned him. It’s a reminder that the story of Breaking Bad was equal parts Walter and Jesse. That so much of what Walter White achieved (good or bad), was reliant on the network of people Jesse Pinkman had iat his fingertips. In giving us this final chapter in the story of Jesse Pinkman, it not only ends his arc, it gives a solid ending to the entire world of Breaking Bad.

The satisfaction of Jesse’s final chapter isn’t the only highlight of the film. The performance by Paul is incredible, and is on par with some of his best work in Breaking Bad. There are long stretches of time where Jesse doesn’t say a word, but he doesn’t need to. It’s not always clear if he’s silent due to the torture he went through while held captive at the end of the series, or if it’s because he’s become more focused on getting to his own finish line. But it doesn’t matter. The small intricacies of Aaron Paul’s performance give us everything we need. It’s an outstanding performance by an actor who deserves far more attention than what he has received since the ending of the series.

I don’t know that I would say El Camino was necessary. Breaking Bad ended in a nearly perfect manner, one which gave us hope for Jesse Pinkman as he rode off into the night, and ended Walter White’s story definitively. However the film is incredibly satisfying and never changes any good that the series finale created. This is an epilogue worthy of our time and effort, and a sort of thank you to the fans who adored the series that thrived in the age of peak television. It’s also something that is worth adding to the end of a repeat binge of the series, as it doesn’t diminish anything that came before it. In the age of reboots and sequel series, this may be one of the few times we get to go back to a beloved property without the entire thing being tarnished, and that’s nothing to scoff at.