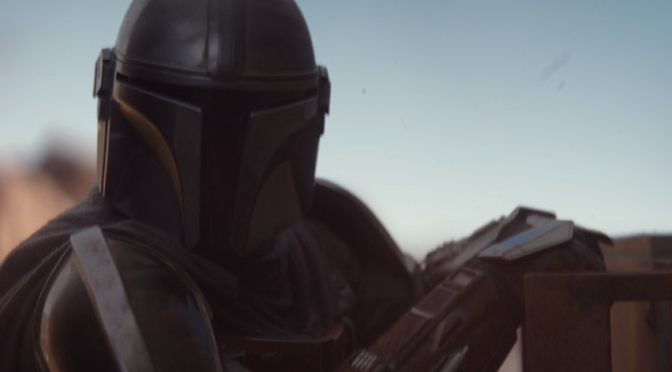 The second episode of The Mandalorian dropped today, check out our thoughts here!

Disney+ released the second episode of the live action Star Wars series, The Mandalorian, today and the series is taking the perfect road forward. In the first episode we met the titular protagonist (Pedro Pascal), who is given a mysterious bounty with little information on who or what he is searching for. He knows the individual is 50 years old, and he has a tracking device he can use to find them. In the first episode we also see that our hero was seemingly orphaned during conflict on his planet of Mandalore. Which makes the reveal of his bounty even more interesting.

Before we dive into spoilers for either of the episodes, let me say that this episode truly does expand on everything great about the first episode. It feels like it is fully on the outskirts of the Star Wars universe. This second episode does introduce things that are bigger elements of the franchise, but it’s not a direct implication of connection to anything we know. The Skywalkers and their saga are still far away from this corner of the galaxy. But what is introduced here is a reminder that this is the same galaxy, and there are things that will be part of any Star Wars story, because this galaxy has certain trademark elements.

As with the first episode, the score is fantastic, the way the episode is shot and edited is superb. Overall this type of television feels much more like a feature film than it does a regular television series. The effects are incredible as well, with things looking so intensely realistic that I’m honestly not sure what’s computer generated and what’s done with practical effects. Either way, every shot and every moment pulls you in even more and makes you believe this is all real. It’s done seamlessly and beautifully, and it makes me yearn for the next episode.

Below we’re going to get into details of the plot of this episode so be warned, SPOILERS ahead.

First off, the Yoda baby is the cutest thing ever created. (Obviously it’s not Yoda as he’s dead at this point, but you get my point.) It’s no surprise that the baby is force sensitive, given that the one other major alien we’ve seen of this race is Yoda, one of the most powerful Jedi in the galaxy. The question is how powerful will this baby be, and where did it come from exactly. Hopefully we’ll get some answers to that as the series moves forward, but I would be happy to watch an hour of this thing chasing after tiny beasts it eats for snacks on repeat.

In terms of the Mandalorian’s choice to keep the baby alive for now and the lingering question of whether he’ll keep it or hand it over to “the client” (Werner Herzog); this is a great set up to show who this character is. We know he lost his family and was a “foundling” after some sort of conflict on Mandalore. We know he’s sympathetic towards children, based on his comments in the first episode. So now that he’s faced with this challenge of trying to decide what to do with this child, it gives him a great moral dilemma that we get to see play out and define who he is and what his true beliefs are.

In terms of the events that occurred in the episode, it’s good to see that the show is going to take it’s time with this story. We could have easily just seen him get on the ship with the baby and head off to space to continue his journey. We didn’t need to see him deal with Jawas, we didn’t need Nick Nolte’s Kuiil again, but in showing us these things we get to be fully immersed in this world of Star Wars. It tells us that this show isn’t just going to gloss over things, it’s going to take it’s time so that we get to see how we truly get from point A to B, and all the hardships in between.

I loved the first episode of the series and was excited to see where it would go next. But this second episode truly blew past my expectations and is something that I could watch over and over and over again. If the rest of the season is like these first two episodes, then this series may be one of the best things to ever come out of the Star Wars franchise. It also reinforces the fact that Jon Favreau is a master storyteller, and we need him to write everything. I have spoken.

The first two episodes of The Mandalorian are currently streaming on Disney+. Keep following Poor Man’s Spoiler for more Disney+ coverage, and check back with us each week as we take a look at each episode of The Mandalorian.