The hit animated Disney film Moana is getting its first Disney Parks attraction.

The D23 Expo is currently in full swing in Anaheim, CA and the first big news out of the Disney convention is that Epcot will be gaining a Moana attraction. The attraction, Journey of Water, Inspired by Moana, will “let guests interact with magical, living water in a beautiful and inspiring setting.” It’s unclear what that means exactly and how the attraction will be formed, but it may end up being an outdoor attraction that makes use of advanced fountain technology. The name makes it seem like the attraction may be a more basic concept with a Moana overlay, but we’ll see how things work as more information is revealed.

The biggest question though is where the attraction will be inside of Epcot. The park already has a water themed attraction in a sense with The Seas with Nemo and Friends. It seems unlikely that Disney would pull that out, but a clue to the Moanaattraction’s location lies in concept art released by Disney for the extensive rehaul of the entire park. The former Innoventionsarea that now houses the Epcot Character Spot, Starbucks, and Club Cool, is completely gone and replaced with what appears to be new attractions. It’s already been announced that the former Innoventions area would be closed and the area re-imagined. But this looks as though the entire area will be demolished. 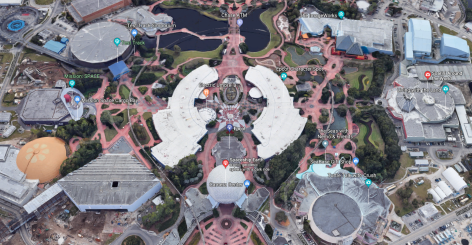 It’s likely that the Moana attraction will be at the front section where the Character Spot currently stands, as the concept art seems to reveal an area with much more foliage. Something that matches the Concept image revealed for the Moana attraction, and that could help hide some of the inner workings of the attraction if it’s set outdoors.

For now this is all speculation, but we’ll hopefully get more information this week as the D23 Expo continues with official presentations.

Keep following Poor Man’s Spoiler for updates on everything Disney.