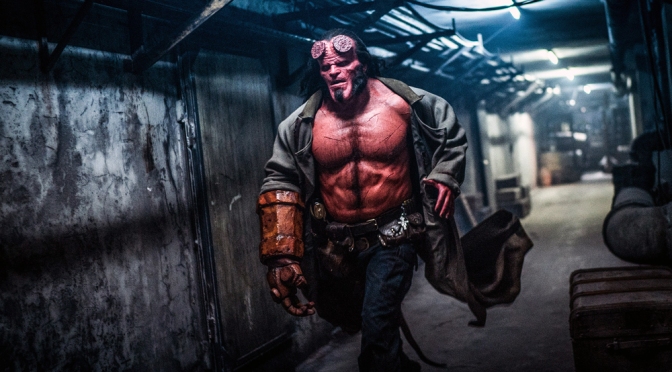 Hey everyone, sorry I late I was having some cars issues and…

Oh, looks like everyone else got it…Damn maybe next time…JK I can’t pass up an opportunity to jump in and set this movie on fire. This is probably going to be a little spoilerific, but you’ll thank me; I saved you some time.

First things first, the beginning of this movie is not bad. There is actually some interesting stuff going on. David Harbour is no Ron Perlman, but he isn’t terrible at first. Ian McShane is interesting, and I want to see how they build things up to the climax. Because I went in with super low expectations, I didn’t even mind how terrible the effects were at first. I really wish it would have stayed this okay for a moment longer because the pace just takes off after this point and comes crashing down. Fortunately for me, I read the wiki page for Hellboy a while back purely out of curiosity, which I’m pretty sure is what the screenwriter did too. The average film goer would have been absolutely lost as to what the hellboy was happening at any point in this movie. There was just way too much going on. It’s as if they somehow knew that this was only going to get one movie so they put every Hellboy story into one discombobulated mess of a film that never slows down. The results are kind of like:

The benefits of the previous movies are the inventiveness of Del Toro and strong actors to bounce off of each other. For a fair amount of this movie, Hellboy is just there by himself, and when his partners are introduced, they are both sooo dull. They are just there because the plot demanded he have friends, I guess. To be fair, Alice and the changeling stuff was a nice part, but they don’t do enough with that for it to even be relevant. It would have been way more impactful for Alice to have been the one to defeat the changeling that she was replaced with at one point.

Dave has to play off of these brick walls that are the other characters to try and keep us entertained, and to be honest, it just devolves rapidly into stupidity. It was as if the director didn’t like the beginning and decided he couldn’t re-film that and just had him do something else instead, and that something else was force Dave to watch footage of the first films spliced with Macho Man Randy Savage until he absorbed them through osmosis. There’s a line where Hellboy says something like, “You got 3 minutes before I …” and I almost lost it because I heard Bonesaw coming through.

The film just jumps from entity to entity that wants Hellboy dead for one reason or another. He just gets to go to the next place he is required to go and run around on a green screen while sit gets rendered behind him? Oh, is it not supposed to look like that? The fights in this movie are so fake that they are now a part of a well-balanced vegan breakfast.

Everything with the Baba-Yaga is pointless and makes me wish it was Keanu Reeves. In fact, I would not be shocked to learn that Ian McShane thought this was a script for another John Wick movie when he signed on. Hellboy Versus John Wick; did Toby write this? Probably not; that one actually sounds like a good time.

If I haven’t lost you yet, the following is a true statement: Hellboy is the true King of England destined to wield excalibur and usher in the apocalypse  with the person who is responsible for the plague as his bride. Yeah, all of this is fairly accurate to the source material, but that doesn’t make it good. The first film and this one have scenes in common, but the predecessor does them better–and not even just a little. Like, significantly better. (Side note: I would watch the shit out of a movie about a guy called ‘The Lobster’ who hunts Nazis).

Maybe there is a reason that Del Toro wrote the screenplays for his movies himself and used the source material as a source instead of just jamming it in there like an elbow drop to a hamster.

Sorry, I just can’t get over how silly that movie was. Please, go ahead and wait until they play this on FX a year from now.

Rating: 1 demon killing bullet of of 5