Before the reboot hits theaters, we’re taking a look at Big Red’s previous films. Today we continue with a look at Hellboy 2: The Golden Army.

Oh man, this film is vastly superior to the first and I cannot begin to understand why their scores are similar on IMDb. This film is a testament of why I’m weary of the remake. I know a sequel cannot exist without the first film and, ultimately, watching the first one increases the enjoyment of this film.

Guillermo del Toro’s largest strength is his ability to bring imagination into the screen. Pan’s Labyrinth, The Shape of Water, even Pacific Rim benefit from his vision for the mythical and fantastical.

The Golden Army is no different. My wish from the first film was that it took some more time building the world they inhabit. The monsters in the film feel more real than the humans. The effects hold up well too. However, I meant more so that they feel valid – the emotions, their fears, their squabbles, feel like something any of us could be a part of. They are relatable and that level of empathy allows us to immerse ourselves in the story and attach ourselves to their care. 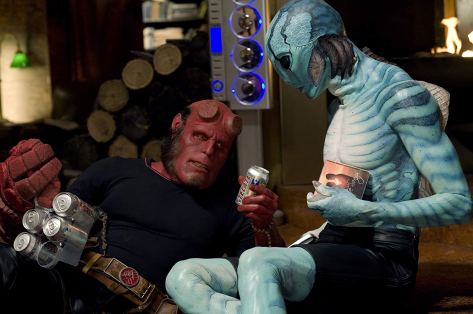 My favorite scene in the whole movie is when Abe and Hellboy are singing I Can’t Smile Without You. 1. Because that song is awesome and; 2. It’s all about them being so over someone with love that they have to emote it somehow. What is more human than love? A genuine love that is more believable than Bradley Cooper and Lady Gaga’s in an Oscar nominated film.

The plot in this movie is more coherent as well. There’s an active villain, a catastrophic-level threat to prevent. Subplots that you care about and want to see through. It’s like they somehow went into the future to read my comments on the first film and made sure to fix it.

The make-up and effects in this movie are better too and they are not that far apart. Now, there is some obvious CGI, don’t get me wrong, but so much seems tangible that it is easy to overlook. Hellboy looks more crisp and, somehow, younger. Abe has more color and variation and is out more to show it off. The introduction of Strauss is awesome and I love watching him talk.

The most breathtaking character is barely in it – The Angel of Death. Truly horrifying and yet beautiful. Some would argue a tad bit reused from Pan’s Labyrinth, but who’s to even say they couldn’t be the same world anyway (fan-fiction writers, please credit me). Again, played by the great Doug Jones, the character left an impact with the time she had.

Honestly, I wish that they would have turned Hellboy into a monster of the week show with a thorough line of wondering where he came from. It would help us get into the world, flesh out these amazing characters, establish more lore, and give us more time in such an awe inspiring world. I wish nothing but the best for the cast and crew of the new film, but they have a lot to live up to.