“You know nothing, Jon Snow.”

With the eighth and final season beginning this month we’re looking at each season. You can read our Game of Thrones 101 here and our season 3 recap here. For now we’re going to look at season 3 as a whole, and whether the hype surrounding the show is merited.

Based on the popular book series by George R. R. Martin, A Song of Fire and Ice, Game of Thrones centers on the fictional land of Westeros. The land is ruled by whoever sits on the iron throne, and through the years the leaders of the seven main houses fight for the right to rule the Seven Kingdoms of Westeros. The series became an immediate hit for HBO, and helped define the idea of peak TV.

The third season of Game of Thrones does a solid job of ramping up the threats to the characters we have grown to know and love, and placing them in situations that we may not expect. By the end of the season the Stark house has lost almost all power, Jamie Lannister is without a right hand and almost likeable, Bran is heading north of the wall, Tyrion and Sansa are married, and Jon Snow knows nothing. And of course there’s the infamous “Red Wedding.”

The “Red Wedding” is quite possibly one of the biggest moments of the entire series. It completely takes away all the power from the Stark house for now by wiping out Robb, Talisa, Catelyn and plenty of Stark banner men. In a way it’s an even bigger change than Ned Stark’s beheading in season one, because at this point there’s no major threat to the Lannisters. Robb and his army were the only ones who were successful in battle against the Lannisters. They were the only serious threat for now. By wiping them out it changes the game completely, and leaves the Lannisters in a point where they may end up feeling too invincible for now.

Another important aspect of season three is the rise of Daenerys as a Queen who is followed willingly. As she continues her trek north, the Mother of Dragons begins freeing slaves and offering them the option to follow her or leave. It’s the first time we’ve seen a leader say to their people, come with me if you wish, or don’t but live freely. For everyone else, even the Starks, it’s essentially been, you’re with me or you’re against me. And while a large part of that stems from the other rulers being directly in the middle of war, they still make that choice to give an ultimatum.

In the first two seasons it wasn’t clear if Daenerys would be the true good ruler, or if the Stark house would get far enough to make a larger stand. But with Robb and his followers wiped out, and every other Stark on their own personal missions, the Stark banner is as good as gone. Daenerys and her army of unsullied, Dothraki, and Second Sons are now the de facto good guy army. But that doesn’t mean it’ll be a quick journey from here to King’s Landing, and there’s nothing wrong with that.

By taking it’s time to build up Daenery’s followers the show instinctively makes it more entertaining to see her win. I’d rather see Jorah come back to her saying men laid down their weapons and decided to fight for her instead of against her, than to see her in fifteen battles with different armies. That being said, when we get to the point where she does fight off other armies, it’s going to be even more enjoyable. Knowing that she’s coming for the Lannisters, with an army of followers who are behind her because they love her, and not because they’re told to fight, is going to be fun to watch. 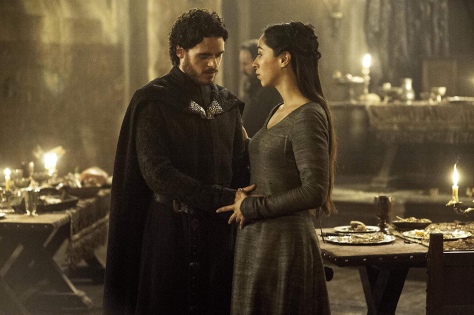