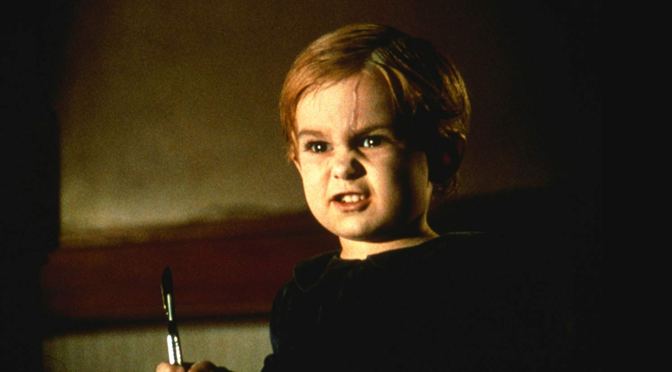 From novel to screen: how King’s Pet Sematary lacks emotion in film

Remakes of older films are making their rounds, so it’s no surprise Stephen King’s Pet Sematary will be making its second debut on April 5th. Originally published in 1983, the horror novel was adapted into film in 1989. Much like many of King’s novels and films, this one includes jump scares, spectral visits from the dead, and all the foreshadowing to have any viewer screaming “don’t do it!” from their warm and safe couches. So, with anticipation of the new film – and hopefully better effects – let’s dive into the older movie and novel.

The film begins with opening credits showing the pet Sematary, and there are several children’s voices naming off their dead pets. It moves on to show the large Orinco trucks flying down the highway in front of the house now purchased by the Creed family, who pull into the drive. Louis Creed (Dale Midkiff) moved his family from Chicago to begin as a campus doctor for the University of Maine. Within their first few minutes of being at their new home in rural Ludlow, two-year-old Gage (Miko Hughes) already nearly gets hit by one of the large semis passing on the highway but is saved by Jud Crandall (Fred Gwynne). Crandall, a man in his eighties, has spent his whole life in Ludlow and knows much about the town and its secrets.

From here the movie takes off at lightning speed without allowing the viewer to latch onto any characters. Louis’s first day on campus is met with death, where a young student by the name of Victor Pascow is hit by a car while jogging. While Louis sits next to Pascow’s lifeless body, blood pouring from the grotesque head injury, Pascow reanimates to warn Louis of the dangers beyond the Pet Sematary behind his house. 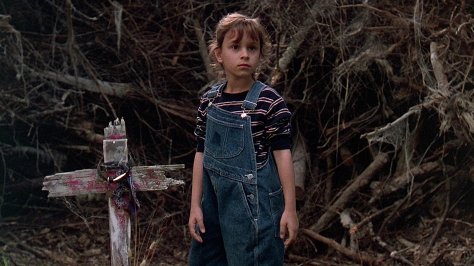 Later that night Pascow appears as an apparition and leads Louis into the cemetery behind the house to once again warn Louis not to go beyond it, where the Indian burial ground is cursed. This scene never really gets fleshed out, as it seems there is a rush to get to the conclusion of the story.

Within fifteen minutes, the summer has passed and it’s now Thanksgiving. Church, Ellie’s (Blaze Berdahl) cat, has been hit along Route 15 while Rachel (Denise Crosby) and the kids are visiting her parents. This will run parallel to what’s to come by the end of the film.

Jud, against his own better judgement, leads Louis to the MicMac burial ground beyond the Pet Sematary to bury the cat. Church returns the next day but takes on an almost demonic quality. He brings Louis dead birds that are mutilated. Jud later blames this on the Indian burial ground being cursed and drawing people into its evil.

The movie flashes forward again to the next summer where the family and Jud are having dinner outside in the field by the house. Gage and Louis are flying a kite. The viewer can already sense the danger. It’s almost palpable with the music and the almost too joyous lunch – I mean, it is Stephen King, let’s not forget. Louis, distracted by the rest of the family asking for a turn, lets Gage get away while chasing the kite string, and Louis nearly catches him before he runs into the road to get slammed by an Orinco truck. We’re spared the obvious gore, aside from a single bloody tennis shoe landing in the road. 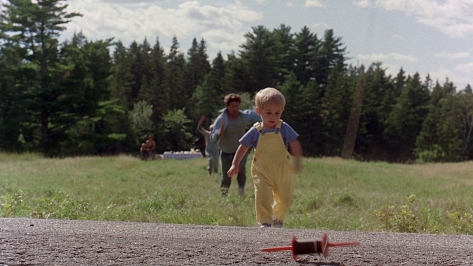 We all know what Louis does from here. He sends his wife and daughter to her parent’s house in Chicago, digs up the body of his son, and reburies him in the cursed ground. Pascow, still acting as a ghost with good intentions, warns both Ellin and Rachel since Louis refuses to listen to him. Rachel, ignoring Jud, returns to make sure Louis is okay. But it’s too late. By now, Gage has returned from the dead, “played” with Jud (killing him with Louis’ scalpel), and has now murdered Rachel.

Louis, stricken with grief and possibly going mad from the influence of the cursed ground, buries Rachel in the hopes that she’ll come back normal since she’s just recently died. Except when she returns, she embraces him one final time before stabbing him with a butcher knife. The movie ends here (and no, we’d really rather not talk about Pet Sematary 2).

King’s novel, however, tends to throw the reader more into the scenes and forces him or her to feel a stronger sense of empathy toward all the characters. Missy Dandridge, portrayed as a middle-aged woman in the film who kills herself within the first 20 minutes is actually an older woman who rarely gets out of her house in the novel. Perhaps the film was using Missy as a replacement for Jud’s wife, Norma, who in the novel dies of old age. But there was really a lack of attachment to many of the characters in the movie. I did not feel for the loss of Gage nor Louis’s desire to bring him or Rachel back like I did reading the book.

It could have been to cut time (but let’s be real, I’ve sat through Rose Red and The Green Mile countless times, Mr. King) but either way, I would definitely rate the novel to be higher quality than the film. After seeing the new trailer, I’m optimistic. It seems like the victim will be five-year-old Ellie rather than Gage, which seems more believable if she’s hit running after Church, who could be wanting to stir up trouble after his resurrection.

Don’t forget to catch the remake of Pet Sematary when it comes out in theaters on April 5th.

Written by Amanda Creech
(Amanda specializes in sarcasm and the horror genre – mostly in literature, but also film, sometimes real life. She currently writes memoir and fiction in her spare time and maybe when she’s a big kid she’ll be famous for her writing – if anyone enjoys reading about the drama of a small town southern Indiana girl moving north. Follow Amanda on twitter at @A_Creech93.)