Could Dumbo be a match made in heaven?

I’ve always had a deep appreciation for movies. My earliest memories all consist of experiences at the movie theatre with my family. For my entire life, I have wanted to make movies and have  been obsessed with the nature of creating films. In college I became obsessed with film blogs and entertainment news sites, which led to the first iteration of Poor Man’s Spoiler. The three biggest influences on me growing up were Batman films, the filmography of Tim Burton, and specifically Burton’s incredibly underrated 2005 film, Big Fish. All of which is why Dumbo excites me in ways I never would have expected.

As I write this, I haven’t seen Tim Burton’s live-action adaptation of Dumbo. I’ve actually done my best to stay away from news on the film, despite that being my job here for the site. But since the release of the first trailer for the film, it’s reminded me of the films that helped shape my life and why I love films: it calls back to films that I grew up with. Tim Burton’s name is on it, it features a reunion of Burton, Keaton, and DeVito, and it centers on a tall tale set in a circus. For me, it’s not just about the idea of nostalgia but the idea of remembering why we love movies.

Movies give us the ability to escape the world we live in for an hour or two and be immersed in a world that at times can be better than our own. We’re overwhelmed with the sights and sounds of something that took years to create, usually crafted by some of the greatest artists of our time. Movies can give us the  opportunity to return to the childlike sense of wonder we felt before the world became real and before we learned that people are evil in real life–that the big businessmen who want to use others for their own gains are actually out there or that the prejudiced pigs of the world aren’t just silly villains, but are our neighbors and the people we thought we could trust.

There are so many times where I work on this site and it’s not easy to be fully immersed in the film. I see an element of the film that makes me think, “Oh, we could write a piece on that,” and then I’m taken out of it, and it gets worse at times with the way films have become interconnected and have leaned into easter eggs and winks at the audience. You see a Marvel film, and there’s a mention of a hero involved in some other franchise, and your mind immediately goes to, “Hey, maybe they’ll cross over, or that hero will appear later to help stop the villain. Or maybe now this comic book storyline can play out.” You see a remake of something and a member of the original cast pops up, and you laugh and or get excited. But it all takes you out of the full experience. 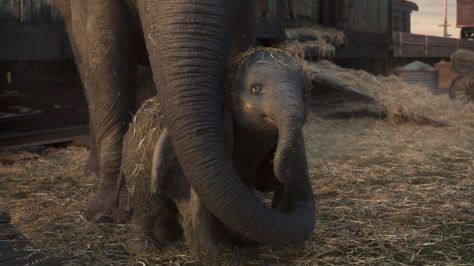 I don’t doubt that Dumbo may do this. It would almost be surprising if there isn’t a nod to Batman Returns, one of my favorite Batman films. And this is the one time where I feel like I can accept that nod without fully being pulled out of the film because for me, this film is much more about the parts involved than the film itself; sometimes that’s alright. Sometimes we need films to be our comfort food. We need to say, “I’m going to this film expecting to see Tim Burton aesthetic, Michael Keaton and Danny DeVito in supporting roles, and a circus atmosphere that reminds me of Big Fish, and I’m going to feel good for two hours.”

I get a lot of flack from my friends and many members of the team here at Poor Man’s Spoiler because I tend to think more highly of films that they do. If you go through the films I’ve reviewed, I sometimes give them higher ratings at first glance than they may deserve. But my thought on film and television, to some extent, is that it should always be able to pull us out of our lives and out of this world and give us hope. Films should be able to give us the chance to escape and find joy for a period of time. Whether that escape is to another planet or to the streets of a city we know with people we’ve only just met on screen, there should be some aspect that takes us away, even if it shows us something that we know intimately.

I’m excited for Dumbo because I believe it can be that type of film on multiple levels. Not just for me but for my friends and family as well. There are other films that I’m excited for–Avengers: Endgame, Joker, Star Wars Episode 9–but Dumbo feels different. It feels like something I wish I had more of. Even if all that comes from it is another Tim Burton film with Keaton and DeVito in a circus setting, I know I can live with that because at least it gives me that. And for that, I’ll enjoy it.

Keep following Poor Man’s Spoiler for all of our Dumbo coverage, and be sure to see the film when it hits theaters on Friday March 29th.