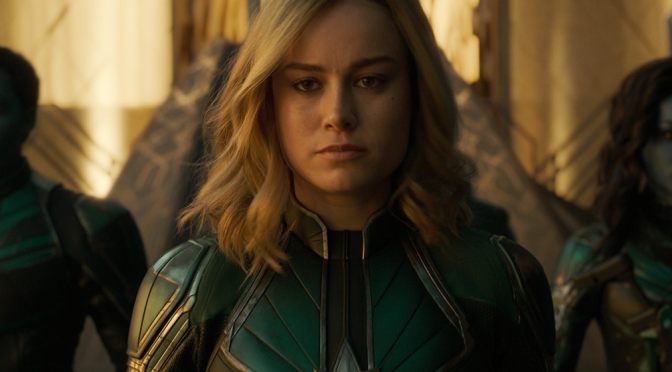 Eric returns with his thoughts on the highly anticipated Captain Marvel.

So, we will probably be talking about this film more this weekend and next week, but I wanted to be sure to get you all my spoiler free thoughts.

First thing, Marvel did an abysmal job of telling people what this film was about and why we should like Captain Marvel. There are some people that took it waaaaaaaayyyy too far and made her out to be this robot that recites her lines like Siri and never smiles. How these people managed to judge her entire performance before actually seeing the movie is a super power in and of itself.

I genuinely cannot understand the hate for this movie. That isn’t to say the film is perfect that or you can’t have your own subjective opinion. However, people are getting more riled up about this movie than I did about How To Train Your Dragon 3 and for things that matter way less.

One of the biggest things I’ve seen is that Brie Larson has no personality and comes off as bland most of the time. She was great. She played the character well and was extremely likeable. She holds her own in scenes with charismatic force Samuel L Jackson. She’s witty, she laughs, she yells in joy, she gets mad, she teases – she’s fun. Captain America is more bland than Captain Marvel.

Another big thing I’ve seen is that it feels like a Phase 1 film. It is though, for her. Black Panther was also more so a Phase 1 film, and it’s a fantastic film that won Oscars. That’s not to say this film is on the same level, I’m just pointing out that people have said that Black Panther is bad too, but it’s not.

It’s a Marvel movie about their namesake: do you really think they would let it be bad?

Captain Marvel is now playing in theaters. Be sure to keep following Poor Man’s Spoiler as we continue to cover Marvel’s latest film. You can also check out our previous coverage at the links below.

6 thoughts on “Bickering with Brockett: Captain Marvel – Clickbait Title To Play On A Feud That Shouldn’t Exist”