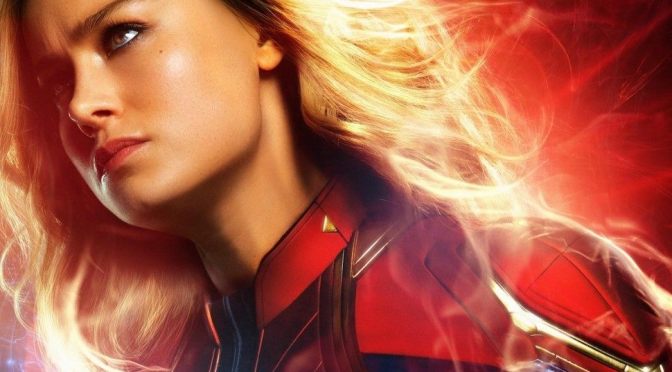 After years of waiting and wanting, Marvel has finally released their first female-led feature length film, Captain Marvel. The film stars Brie Larson (Room) as Carol Danvers, a Kree warrior who lands on Earth while fighting Talos (Ben Mendelsohn, Ready Player One), a Skrull leader. She soon meets up with Nick Fury (Samuel L. Jackson, The Hitman’s Bodyguard) and they work together to stop the Skrulls from invading Earth. The film is directed by Anna Boden and Ryan Fleck (Mississippi Grind) with a script by Boden, Fleck, and Geneva Robertson-Dworet (Tomb Raider).

Heading into the film, it’s hard to know exactly what to expect, as the trailers and commercials haven’t revealed much about the plot. We know that Larson’s character is Carol Danvers, a member of the alien race known as the Kree. We know that there’s some element of her past that deals with her being a test pilot for the US Air Force on Earth. We know that she fights with a team of Kree warriors to stop the Skrulls in a long fought Kree-Skrull war. Somehow this all leads her to Earth where she teams up with Nick Fury. Beyond that, nothing is clear.

The marketing team did a phenomenal job of not letting the cat out of the bag here, as there’s so much more depth to this story than what’s been revealed thus far. There are also plenty of twists and turns that even the biggest comic book fan may not see coming. That being said, the twists make sense if you’re aware of the cosmic history of the MCU. The film feels at home with the likes of the Guardians of the Galaxy films, where a human lead is mixed up with strange alien races, doing what they can to save the Universe or at least Earth. That being said, the stakes here always feel personal, and the film does a fantastic job of making it all intensely personal.

Carol ventures out on Earth because she feels a connection there. She has flashes of memories on Earth that she doesn’t understand. It’s been six years since she woke up on the Kree planet of Hala and joined their Army to fight the Skrulls, and everything before that is a blur until now. She wants answers, and we want to see her get those answers. There are deeper reasons for the Skrull threat to be toned down as she goes on this quest to find out the truth of her past, and it’s all brought together flawlessly. This story could have felt convoluted and too complicated. It could have felt as though plots points were just left hanging to dry as the film continued, but everything is sewn together tightly in an incredibly satisfying nature.

The film also excels thanks to the chemistry between Larson and Jackson and especially Larson’s ability to command the screen. The “buddy cop” aspect that has been mentioned about the film is spot on, and it helps us care even more about the characters involved. In a way, it was a great way to lead us into the character of Carol Danvers because any MCU fan likely already loves Fury, and Larson makes it incredibly easy to love Danvers. She’s smart, funny, and incredibly powerful in every way. She’s a perfect leader for not only this film, but for the MCU as a whole moving forward.

Larson’s work here also needs to be highlighted for what she’s able to achieve in scenes with people like Mendelsohn and Jackson. Nearly everyone in Hollywood has worked with Samuel L. Jackson before, but few people have been able to go toe-to-toe with him in terms of charisma, timing, and snark. Larson not only holds her own but outshines Jackson with ease throughout most of the film. Her work with Mendelsohn is just as impressive. He’s become well-known for being someone who can chew the scenery and give you a bombastic performance. While Mendelsohn doesn’t play it quite as big here, he’s still a force to be reckoned with, and Larson still outshines him. She carries this film one hundred percent, and her performance is easily one of the best in the MCU.

The film also does a great job at using elements from the comics and the rest of the MCU to tell a new story. The setup for each planet feels like the Guardians of the Galaxy films. There are characters we know and love (or love to hate) from previous films. The interpretation of the Skrulls is so perfectly spot-on, that any fan of the long-time Marvel villain will be happy to see how their story plays out for now. The shapeshifting villains have often been used as both evil, conniving spies and as comedic relief., with the leaders being more evil and intelligent and the foot soldiers often being mindless drones to the cause. Captain Marvel does an excellent job of incorporating those elements into the characters. Then there’s Goose, Carol’s pet cat from the comics. (The character’s name was changed from Chewie to Goose for the film.) I guarantee you that everyone is going to be naming their cats Goose for the next few years. As one of our other writers put it so eloquently, “Goose is bae.”

Honestly, there isn’t a single bit of the film that doesn’t work. The beginning may feel sluggish to some because it has been highlighted in the marketing materials, but there’s enough that was left out of the trailers to keep you interested. Plus, again, Larson’s performance makes you constantly want more. The music is perfect, be it the 90’s songs that help bring you into the era or the score which hits on the right beats perfectly. The visual effects are beyond incredible, especially when you consider how much de-aging is done in the film. Captain Marvel is without a doubt one of the best entries in the MCU, and it’s going to make you yearn for more.

Captain Marvel is currently playing in theaters.
(ALSO: There is a mid-credits scene and a post credits scene, so don’t leave early…)