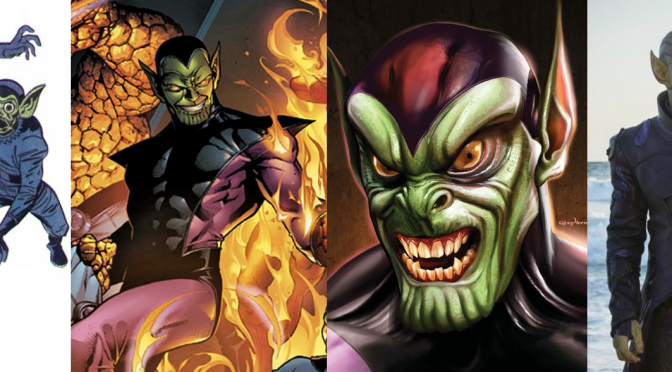 The infamous Marvel villains, the Skrulls, are making their MCU debut in Captain Marvel.

This weekend sees the release of the 21st Marvel Studios film, Captain Marvel. On top of being the first film with a female lead and introducing one of the most powerful and well-loved Marvel heroes, the film will also introduce the evil aliens known as the Skrulls. There are few villains in the Marvel Comic Book Universe that are as admired and important as the shapeshifting alien race, but they have yet to make an appearance on the big screen. We’re going to dive into who the characters are and what their introduction could mean for the MCU.

The Skrulls are well-known for their ability to shapeshift into any sort of organic or inorganic material, often taking the shape of heroes and their allies, making them experts in espionage and infiltration. First appearing in Fantastic Four #2, which was released in 1962, the Skrulls have often been an enemy of the Fantastic Four and faced nearly every Marvel hero at some point or another. They have also been at the center of or heavily involved in multiple major storylines. Captain Marvel is said to be pulling from The Kree-Skrull War storyline from the 1970’s. The Skrulls were also part of the Annihilation storyline, which many believed could be the next major MCU Avengers storyline. But most importantly, the Skrulls were the main villains in the Marvel crossover event series, Secret Invasion.

The Kree-Skrull War storyline saw the Avengers facing off with the Skrulls when they attempted to infiltrate the Earth and disband the Avengers. Captain Marvel, the Kree warrior named Mar-Vell, works with the Avengers to stop the Skrulls and receives their help in removing radiation he received after being stuck in the Negative Zone. This storyline also featured the villain Ronan the Accuser who planned to return Earth to prehistoric times and had begun devolving humans at an Arctic base before being stopped by the Avengers. The story ends with the Avengers advising the Kree and Skrull Empires that they would not tolerate being brought into their conflicts.

The Secret Invasion storyline was released throughout 2008 and featured The Skrulls infiltrating Earth’s defenses. Upon being discovered by the Avengers, they went to war with the entire universe of Marvel heroes. Throughout the storyline, it is revealed that after the Avengers told the Skrulls to stay off Earth during the Kree-Skrull war, they studied the makeup of the heroes. When the Skrull Throneworld is destroyed by the planet eating villain Galactus, the Skrull princess Veranke leads a covert invasion of Earth. They are able to take the spots of numerous powerful figures in governments, SHIELD, and the Avengers team, with Veranke hiding under the guise of Spider-Woman.

The Skrulls invasion is helped thanks to the fallout of the Civil War storyline, with many heroes imprisoned or on the run and distrust and uncertainty flowing through the Marvel Universe. After the discovery of the Invasion, the Skrulls stage a multi-level attack on the earth with a strike against SHIELD, a breakout on the maximum security prison known as The Raft, transporting the Baxter Building (home of the Fantastic Four) to the Negative Zone, a full-scale attack on Thunderbolt Mountain (headquarters to the Norman Osborn led team The Thunderbolts), and attacks on various cities around the world.

The story ends with the Skrulls defeated and Princess Veranke killed by Norman Osborn. Afterwards, the sea of distrust within the Marvel universe remains and Osborn’s heroic actions leads to Norman Osborn being named head of SHIELD, which he replaces with HAMMER. Osborn, in turn, unites a group of villains, including Loki and Doctor Doom, and creates The Cabal. Osborn then uses HAMMER as a mask for the desires the Cabal and himself. Eventually Osborn, HAMMER, and The Cabal are taken down by the Avengers in the follow-up storyline Siege, during which the villains attempt to take control of Asgard. 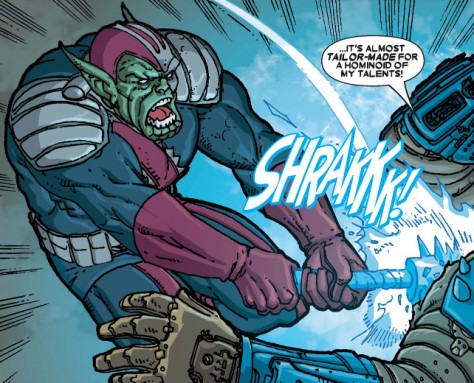 Talos is one of the few well known Skrulls who has shown up in multiple storylines throughout the Marvel comics. Talos is set to be featured in Captain Marvel and is portrayed by Ben Mendelsohn (Ready Player One, Rogue One). The defining characteristic of Talos in the comics, as of now, do not appear to be part of his role in the film. In the comics, Talos is one of the rare Skrulls who is born without the ability to shapeshift, and as such, is considered a mutant by his kind. His dismissal and disapproval by his fellow Skrulls led him to become a savage and sinister force of nature, which led to him receiving the nickname of Talos the Untamed.

Future of the Skrulls

While it’s practically a guarantee that Captain Marvel will defeat the Skrulls she faces in her film, it’s hard to believe that the villains will be done once the credits roll. The Skrulls have become such an integral part of the Marvel Universe over the years, the fact that Marvel has actually downplayed their part in this film almost seems suspicious. While it’s kind of unlikely that they will be featured in Avengers: Endgame, there’s a good chance that the future of the MCU may include elements of the Secret Invasion storyline. The MCU has already seen its own Age of Ultron, Civil War, and Infinity War, and few other storylines are as well-known and impactful as those. Secret Invasion is incredibly well-known and could help create plenty of new storylines for the MCU for the next ten years or so.

We’ll see how many of the Skrulls’ comic book storylines are used and how many are left on the table for future films when Captain Marvel hits theaters this weekend. Be sure to keep following Poor Man’s Spoiler for all of our Captain Marvel coverage.

8 thoughts on “Captain Marvel: Skrulls 101 – Everything You Need To Know About The Infamous Villains”