With the new Season of True Detective hitting HBO at the end of January, we’re taking a look back at the series thus far. Today we continue with Season 1, Episode 7, “After You’ve Gone.”

It’s been 17 years since the investigation surrounding the murder of Dora Lange in 1995. And while Detectives Rustin “Rust” Cohle (Matthew McConaughey) and Martin “Marty” Hart, concluded that Reggie Ledoux was responsible for the murders, Rust began to realize in 2002 that there was a bigger story and the true killer had not yet been caught. But after a fight with Marty, Rust quit the job and went back to Alaska for 8 years, before finally be drawn back to Louisiana out of guilt for not solving the case. Now in 2012 the two have been brought directly back into the center of an investigation when a body is found in Lake Charles with similar markings and presentation to that of Dora Lange in ’95. After a day of being interviewed each by Detectives Gilbough (Michael Potts) and Papania (Tory Kittles), Rust asks Marty to have a beer with him and catch up after ten years.

Rust and Marty have a beer at the bar Rust works at, which is owned by Robert “Bob” Doumain (Johnny McPhail). Bob seems to have some sort of agreement with Rust, as his son went missing years ago, and it’s implied he may have been another victim of the man that killed Dora Lange. Rust convinces Marty that they have to work on this case again, that they owe a debt to the victims. Rust goes with Marty to a storage unit where Rust has been working on the case. At first Marty is still hesitant about everything. But Rust lays it all out. That the Tuttle schools, run by the powerful Tuttle family, were part of it all. That the Tuttles somehow were behind or connected to all of the deaths and missing children and women. 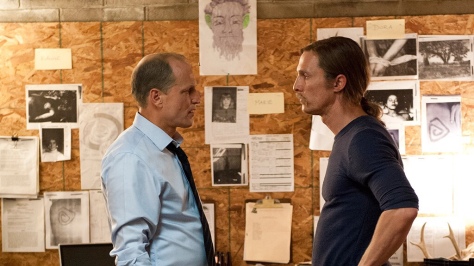 Marty asks Rust if he killed Reverend Billy Lee Tuttle, and he says that while he didn’t he knows why he’s dead. He tells Marty that he had broken into two of Tuttle’s three homes, and at the second one found pictures of kids, and a video. The video consists of a group of masked men torturing, raping, and killing Marie Fontenot, one of the missing girls that are tied to the case. Rust assumes the other men in the group killed Tuttle when the photos and video went missing. Once he shows Marty the video, Marty acknowledges that they need to end this. They set up shop in the offices of Marty’s PI firm, and Marty says his goodbyes to Maggie (Michelle Monaghan). Never directly revealing what’s going on, or that he’s in danger, but she knows.

Rust asks Marty why he quit being a detective, and he explains that he had a case where a drug addict put a baby in a microwave, and after that he couldn’t take anymore. Marty asks why Rust came back and he says he had to end this case. That his life has been a “circle of violence and degradation” and he’s ready to end it. They follow leads and use Marty’s resources to discover two important details. One, the patriarch of the Tuttle family, Sam Tuttle (Father of Billy Lee and Senator Edwin Tuttle), has many illegitimate children. And that one of his grandchildren was likely the man with burn scars on his face that they never found in ’95. Second, the now Sheriff Steve Geraci (Michael Harney), was the cop that took the report when Marie Fontenot went missing.

When Marty first talks to Geraci, he gets nothing from him and knows he’s lying. So they get things set up to talk to Geraci again, and this time get every detail he knows. Marty invites him on a fishing trip, and when Geraci says he doesn’t want to talk about Fontenot, Rust shows up and brings Geraci into the boat at gun point. The episode ends with Gilbough and Papania looking for a church Marty had referenced in their questioning. They stop and talk to a man mowing a yard, the same man Rust talked to years ago. They drive off but now it’s clear. He’s tall, he has burn scars on his face, and his family’s “been here for a long, long time.”

“Life’s barely long enough to get good at one thing. So be careful what you get good at.”

The two best parts of this episode are the reveals of what truly has been going on, and seeing Rust and Marty back at it again. The biggest point with seeing Rust and Marty investigate, is seeing Marty take the leaps with things. He’s used to doing PI work on his own, and while the first half of the season sees Rust discover most of the details leading them forward, this is where Marty truly shines. There’s a reason why Marty and Rust worked so well together, and it’s because they truly are both great detectives. There’s also some greatness in seeing how it all comes together. How it was all there all along, just past Rust and Marty’s line of sight in ’95. But now, it’s all clear as day, and they’re about to finish this once and for all.

The first season of True Detective is currently available on HBO Now, HBO Go, and HBO on Demand. Check back with us tomorrow when we dive into the eighth and  episode of True Detective Season 1, “Form and Void.”