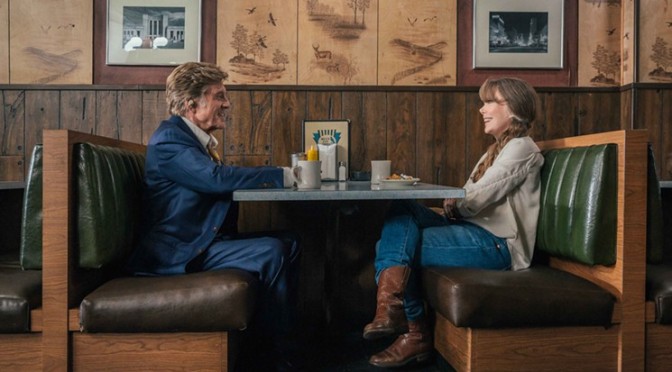 The Old man and the Gun is a heartwarming, charming film that would be nearly perfect if not for one specific casting choice.

The Old Man & the Gun is based on the real life story of Forrest Tucker (Robert Redford). After escaping San Quentin prison at the age of 70, Tucker goes on a string of bank robberies with two other older men, Teddy (Danny Glover) and Waller (Tom Waits). In his travels, he meets and begins to fall in love with Jewel (Sissy Spacek) while being chased by the FBI and Dallas detective, John Hunt (Casey Affleck). It’s a fun, smart, charming film, about a man who is set in his ways and loves what he does, even though what he does is illegal.

Redford is amazing as Tucker, and the chemistry between him and Spacek is beautiful. It helps give the film a great amount of heart, and in a way is the backbone of the film. He’s constantly charming in every single scene, and when he robs the banks, everyone comments that he seems like a nice old gentleman. This decent side of him is more than a show, as we see him truly care for and love Jewel from the moment they meet until the film’s final scenes. You want Forrest to succeed because he’s just such a nice and charming guy. Even the lead detective searching for him ends up feeling that way by the end of the film.

The problem with the film is that the lead detective is Casey Affleck. Personally, I’ve never thought Affleck was worthy of the acclaim he receives. He constantly feels like he’s playing the same whiny character, and it’s hard to differentiate one role from the next. On top of that, it’s hard to watch anything with Affleck and feel comfortable given the recent sexual harassment claims against him. The claims were dealt with in court and happened over 8 years ago, but given the current climate in Hollywood, it’s hard to sit for an hour-and-a-half and watch a C actor–who has done horrible things–and be entertained. It takes you out of the film and makes you wish the filmmakers had chosen anyone else for the part.

If Affleck weren’t in the film, it would be a nearly perfect film. It’s a story about the fact that we constantly fall into the same routines and that even when we’re given the ability to change and do things we truly want to, we still have our bad habits. We get comfortable in the lives we have and the fact that we know how things work. We know what will happen if we go to work every day and come home to the same place every day. We know that we will be satisfied and that there’s no risk there. Even when we have a job that may be risky or dangerous, if it’s routine, then it becomes a comfort.

We see this play out with both Tucker and Detective Hunt. Tucker could stop robbing banks and settle down with Jewel, but that’s not who he is. Hunt would love to catch Tucker and put handcuffs on him, but if he’s not chasing him, then he doesn’t have anything to do. There are always going to be things in life that we say we want, big or small goals that would be nice and would change things up a bit. But humans are creatures of habit, and even if we don’t always enjoy the monotony of the habit, it’s comfortable enough to let it slide and just keep going.

The Old Man and the Gun is currently playing in theaters.

5 thoughts on “The Old Man and The Gun Review: Unfortunate Casting for a Charming Film”