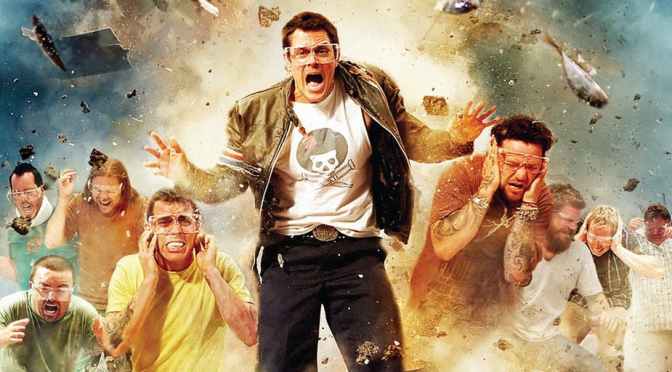 Remember when you thought skateboarding was cool and Bam Margera war more well known than Tony Hawk? I don’t. I wasn’t born yet and I live in a basement, like the physical equivalent of living under a rock. Anyway, Go back to that time and think about how much simpler indie films used to be. Back when Get Out was just something that a strange white man in a man thong heard as he was being chased out of a Radio Shack. Please, do this at home and remember a time when Johnny Knoxville and friends told you not to try this at home.

It has been several years since the last Jackass film, and no one has been able to come to a consensus as to why. Some theories suggest that is is because their earlier hijinx left their bodies in a rapid state of deterioration. Others would say that they all just grew up and decided they wanted to do and try different things. WRONG! Like most things that we love, Jackass was killed off by those damn millennials.

“Toby,” you say through the mail slot in my door, “what on earth would lead you to believe that millennials did to Jackass what they did to Hooters?” Well, what would you say to the fact that there hasn’t been a Jackass film since the majority of millenials got into the workforce? Coincidence? If that’s coincidence, then my middle names aren’t Wild Irish Rose. No, millenials are oversaturating the “Things You Shouldn’t Do at Home” market. How on earth is anyone at MTV suppose to compete with the Avocado Tide Toast challenge? The fact of the matter is, anyone can put themselves doing something stupid on the internet. Hell, Comedy Central takes those videos and tries to convince me that Daniel Tosh is funny. Gone are the says of launching Wee-Man from a cannon or hitting Steve-O with a giant hand. Here are the days of flouring old women at Walmart and seeing how much bleach you can drink while driving a golf cart through an abandoned Toys ‘R Us.

I just want people to leave that stuff to the professionals again. It takes years of practice to do the things they are doing; there is a reason they told us not to try it at home. It’s because if they don’t, then your dad gets mad that he has to Google how to relocate a shoulder at home, because, “Real doctors are for real sons.”

To our millennials readers, go back to arguing on news articles about how working fast food should provide a living wage and not going to Applebees. Leave the stunts to those who have earned our respect after years of lighting fireworks in their assholes.

For those of you who think, “Fuck you Toby, I could write a better article,” don’t try this at home. 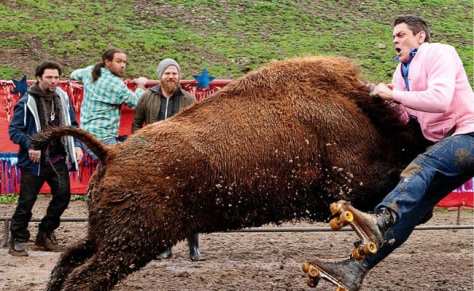