The 2018 San Diego International Comic Con has come to a close but we still have TONS of news from the yearly event! As part of WB’s panels at this year’s SDCC they had a presentation on the upcoming sequel, Godzilla: King of the Monsters. The film is a sequel to the 2014 film, and will be followed up by the Godzilla and King Kong (Skull Island) crossover film. King of the Monsters will feature everyone’s favorite Kaiju facing off against Mothra, Rodan and the three-headed monster King Ghidorah. Director Michael Dougherty and cast members Millie Bobby Brown, Vera Farmiga, O’Shea Jackson Jr., and Thomas Middleditch were all on hand for the panel which included the first trailer for the film. Check out the trailer below followed by some details from the panel.

The panel started with moderator Aisha Tyler asking the group how it felt to be making this film. Dougherty commented that he still feels like a kid playing with Godzilla toys, but the toys are now much bigger. Millie Bobby Brown talked about being excited to join the legacy of this character. Farmiga stated that while she wasn’t well versed on Godzilla beforehand, she was a fan of Land of the Lost as a kid, and would often get lost in her imagination dreaming of what it’d be like to see gigantic beast show up.Jackson stated that this whole experience was beyond a dream come true. He stumbled into acting (thanks to his dad Ice Cube), but when this came up he was ecstatic as he had been a huge fan of Godzilla since he was a kid. Middleditch said that this was fantastic for him as it was his first big blockbuster film, which was something he always hoped for.

They didn’t reveal much from the film but they did say that there will be more monsters that Godzilla will face off against beyond what’s already been revealed. They also said that this film begins with the secret scientist group, Monarch, no longer being secret. The world now knows that Godzilla and other monsters are out there, and there’s fear of what to do now. How to move forward knowing that not only is Godzilla still out there but there could be more monsters like him out there. The group also revealed that during filming Dougherty would blast the roars of Godzilla and the other monsters through large speakers, to give it a realistic feeling on set. They also revealed that the film will use some of the classic Godzilla theme music, and that Bear McCreary will be composing the music for the film.

Godzilla: King of the Monsters hits theaters May 31st. Check out the amazing Comic Con exclusive poster below. Keep following Poor Man’s Spoiler for more updates on all the big news to come out of SDCC 2018! 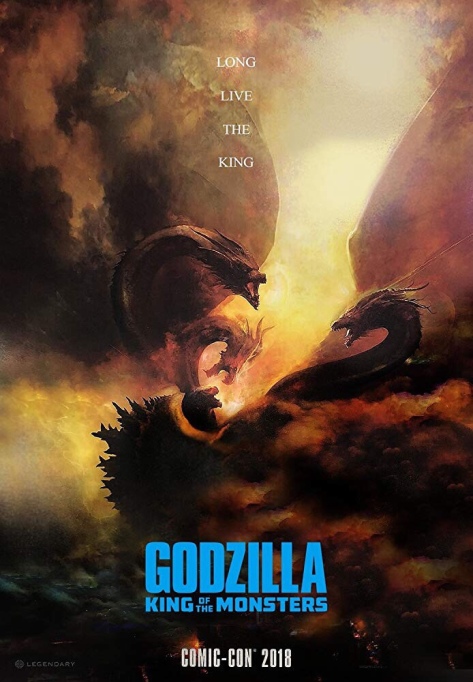 One thought on “SDCC: Godzilla King of Monsters”