The 2018 San Diego International Comic Con is in full swing and we’ve got all the big updates you want to hear about! Every year there’s a question of who “won Comic Con.” This year it seems as though DC has finally taken that mantle after years of disappointment and uncertainty. The biggest highlight of Warner Brothers panels was the Aquaman panel, which featured Director James Wan and stars, Jason Momoa, Amber Heard, Nicole Kidman, Patrick Wilson and Yahya Abdul Mateen II. Check out the first trailer for Aquaman below, followed by details from the panel and info on the additional footage screened at SDCC.

The stars were all incredibly excited to be at Comic Con, and for the audience to see footage of the film. Wan explained that the film is more sci-fi/fantasy than the traditional superhero film. They all talked about working with the Water. Heard said that she spent most of the movie cold and wet, and wasn’t really a fan of swimming. Momoa said that he wasn’t a fan of dealing with wet denim, and his character often wore denim jeans. Kidman loved working with the water and was willing to get soaking wet throughout filming. Mateen admitted that he didn’t know how to swim before the film, and had worked every day to teach himself.

They talked a bit about the action in the film. There’s a lot of wire work with the water scenes. Wilson said that this was one of the most intense experiences he’s ever had. He commented that they did things in this film that even some of the stunt people hadn’t worked on before this movie. Wilson also said that Wan is one of the best directors he’s worked with. That he has an amazing attention to character and detail, which he knew would make this film fantastic. 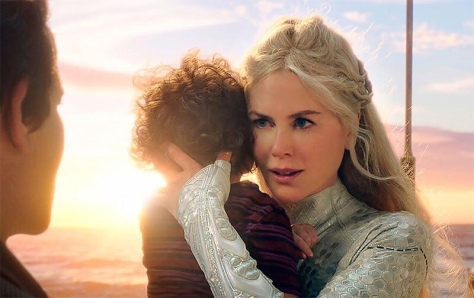 They also revealed more footage for the film, solely for Hall H. It consisted of a sizzle reel of multiple scenes. There were some more glimpses of Black Manta chasing down Aquaman and Mera through a city. Then more of Aquaman and Mera exploring the mysterious secret desert city. Mera uses some of Arthur’s sweat to open an ancient seal that holds a Trident. Arthur jokes that if it needed water he could have just peed on it. There’s some more action shots. Including a scene of Nicole Kidman’s Queen Atlanna fighting. The footage ended with Aquaman in his traditional orange and green outfit.

Aquaman dives into theaters December 21st. Keep following Poor Man’s Spoiler as we continue to report on all the news coming out of SDCC 2018!

One thought on “SDCC: Aquaman Trailer and Footage Revealed”