(Today we’re bringing you a second look at Solo: A Star Wars Story. A spoiler free review from Eric Brockett.)

It shows up once a year. It brings out the worst in people and seems to creep up earlier and earlier every year. With each passing year, you acknowledge that the way you felt as a child is a pipedream, which is inevitably crushed by the realization of the obligation therein. Of course, I’m talking about this year’s Star Wars Film.

Solo: A Star Wars Story was not the spinoff we asked for, and it certainly was not needed, but it was an enjoyable experience, nonetheless. What this film does well, it does really well. However, there are still parts that made me question how much Disney was involved with the decision-making, as not much was risked. Because we know that most of the characters will live to fight another day, the stakes didn’t feel genuine; Han’s triumph (and survival) was predetermined. Overall, the movie felt like a paint by numbers piece, but one that was created by someone who watched a lot of Bob Ross videos. Despite the lack of stakes, it was nice to see that Ron Howard saved the project by acknowledging what makes Star Wars the global phenomenon that it is: the characters.

While the last film director’s favorite character was subversion via inaction, Ron Howard’s characters felt real. Though predictable, their decisions were genuineand were built around what the characters would do as opposed to what looks cool (a distinction between art and fanfiction, if you ask me). All the new characters were interesting or added something to film without feeling forced or plot-focused. Of course, there were elements of the characters or plot points that seemed contrived, but the film would be lacking without them in it, and I think that is important to note.

The actors playing characters that we have seen before did a fairly good job. Specifically, Donald Glover was a perfect Lando in mannerism and even the pronunciation of “Han.” Alden Ehrenreich was a fine Han, but the time period of the film seemed odd, as we aren’t really ever sure when the movie takes place in relation to the OT. That being said, there were some odd moments where Ehrenreich seemed to be playing Han a little too young. Nevertheless, he seemed more faithful as an heir to Harrison Ford than Shia was in the last Indiana Jones film.

I’m interested in seeing where they take Emilia Clarke’s new character, Qi’ra, as things progress, given her relationship with Han and the undefined time span between this movie and Episode IV (where Han meets Leia).

All in all, with a summer of interesting and captivating titles coming out, Solo is worth revisiting a galaxy far, far away.

Solo: A Star Wars Story is currently in theaters. 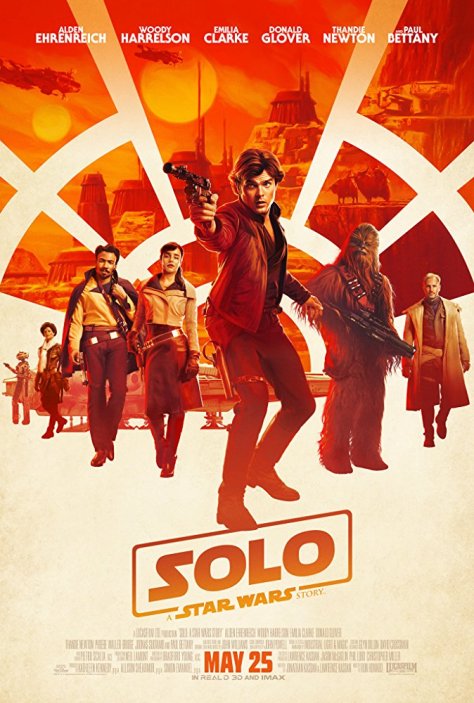