Solo: A Star Wars Story is officially in theaters. After a long and difficult road to the big screen, many have wondered how the film would turn out. We’re going to dive into our thoughts on the film, and if the gamble by Lucasfilm paid off.

The biggest issue that Solo probably had to overcome was the fact that the film was something no one really had any need for beforehand. There’s plenty of elements of the Star Wars universe that people want to see, or questions that they want to have answered on screen. But the backstory of Han Solo isn’t exactly one of them. The Original trilogy did a good job of presenting everything we could want to know about the character. And there isn’t much to question beyond what we know. Overall the film mostly ends up expanding on those already known details without giving much more to the character.

Even from the beginning of the film, there’s nothing that happens that really hooks you in completely. We find out that Han comes from a rough planet, with a difficult life. But we never get many details on what all that means. We see some evil leaders of the area he lives in, but aren’t given many details of what exactly is so horrible about it all. We’re told repeatedly throughout the film that the planet he lives on sucks. That it’s a place no one wants to be. But it doesn’t go much farther than that.

The opening of the film feels more like a sort paint by numbers beginning. We meet Han, he wants to get off his planet with someone he cares about, because their lives suck there. They try to leave and it doesn’t go as planned. He makes a promise to fix things, and that leads him forward. There’s some cool moments in the opening of the film, but the film doesn’t really pick up until we meet Chewbacca.

The meeting of Han and Chewie really helps move the film forward in the best way. From that point on the film works really well. Although they stay by each other’s side throughout the rest of the film, Chewie and Han are each on their own sort of paths throughout the film. But there’s something about having these characters together in a scene, even when they’re not directly interacting with one another that truly makes everything work.

It’s almost as if Han isn’t really himself as we know him until Chewie is in the room. And I think a large part of that just has to do with the writing. We’ve always seen these two characters together. Who they are as individuals is almost always very connected to who they are with the other one around. It feels as if Jonathan and Lawrence Kasdan, the writers, just found their rhythm better once they were able to figure out how to get these two together.

Overall this is a heist film with Han, Chewie, Lando and a few new characters at the center of it. It follows the usual steps and tropes of a heist film, but still has some nice twists and turns. There’s also a pretty major reveal at the end of the film that literally rocked me to my core. Something that I in no way expected and something that is sure to evolves further in the Star Wars Universe moving forward. In some ways a lot of the film feels like build up for that. But we’ll see how that evolves from here.

There is a lot of good in this film. Alden Ehrenreich  does a fantastic job as Han. The important thing to remember with the film is that the Han we meet at the beginning of the movie is never going to be the Han we know at the start of Episode 4. But this film does really help bring him to that point.  While he starts the film far from the Han we know and love, by the last scene of the film he’s the same character we see when we first meet him in Episode 4. I have to hand it to Ehrenreich, the Kasdans and Ron Howard for really making that journey work. And work naturally. There’s a slow build up to that point, one that makes sense, is never forced, and is a perfect example of how to change a character over the course of the film.

Chewie is phenomenal as always. He has a bit more of an emotional arc in this film than usual. But overall he’s just his usual kick ass self. Donald Glover is a perfect Lando, and he never falls into the area of just impersonating Billy Dee Williams. He owns the role, and really shows how Lando is who he is, and what makes him such a great character. Heading into this film I really thought that I would have preferred a Lando film, but in all honesty I think Lando works as used in this film. 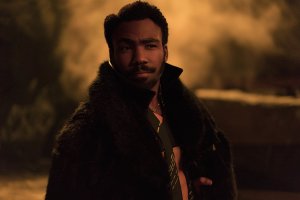 Lando is the Jack Sparrow of the Star Wars Universe. What I mean by that is that he works when he’s part of the world, and not the main focus. Jack Sparrow worked in the original Pirates of the Caribbean trilogy because he had a charisma, attitude and chemistry with everyone in the film. He elevates everyone else, and helps them move forward in the story. But a film with him as the real driving force doesn’t work as well, because he is who he is. He’s not going to change, he’s just going to adapt so that he can still find a way to win. That’s how Jack Sparrow works, and it’s how Lando works. And Glover pulls that off perfectly. We don’t need a solo Lando film, but feel free to put Lando in every possible Star Wars film possible from here on out.

I went in to Solo not sure of how to feel, and not expecting much. The film surprised me a lot and was honestly much better than I ever figured it would be. There’s plenty of fun moments, good comedy, great action, surprising twists, fantastic acting, cool new aliens and planets. Overall it’s honestly a solid film, that takes a little bit to get into but works the rest of the way. It’s a nice addition to the Star Wars Universe, and while there’s a chance that it could have a sequel, it also leads perfectly into Episode 4.

Overall we give Solo: A Star Wars Story an 8.5/10. If you’re looking for a fun, summer blockbuster, Solo is exactly that.

Solo: A Star Wars Story is now in theaters. Keep following Poor Man’s Spoiler for more coverage on the film and the entire Star Wars Universe. 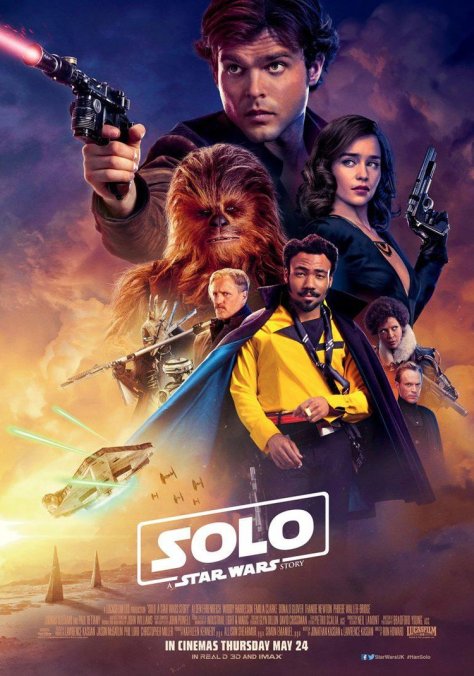 One thought on “Solo: A Spoiler Free Review”