Avengers: Infinity War has finally hit theaters, and it has brought some seismic changes to the MCU. From uniting all the heroes we’ve grown to know and love over the past ten years, to seeing numerous deaths over the 2 and a half hours of the film. This film is monumental in numerous ways. If you haven’t seen the film and want to stay clear of Spoilers you can read our Spoiler Free Review HERE. But now we’re going to dive into the details of this film, and open up on the major spoiler elements. Including the deaths of the film.

Again if you haven’t seen the film yet, do not read this. Come back later. But for those of you that have, let’s jump in. 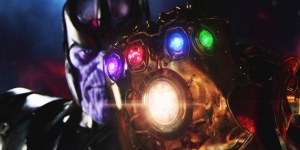 We’ve known since the end of the first Avengers film back in 2012 that Thanos was coming, and that along the way he was going to try to gather the Infinity Stones. And since then we’ve seen him try. But he finally does it in Infinity War. He takes the Tesseract from Loki, the Aether from the Collector, the Power Stone from the Nova Corps, the Mind Stone from Vision’s head, the Time Stone from Doctor Strange, and sacrifices Gamora for the Soul Stone. And when he’s done, he snaps his fingers and makes half of the Universe disappear. Thanos is successful in doing all of this, in accomplishing everything he’s ever wanted, and in the process sacrifices everything he’s ever loved. Thanos is the main character of this film, and he succeeds in his goal. But that doesn’t mean he gets a happy ending.

Thanos’ win brings about mass destruction in the universe, but as he’s reminded after he snaps his fingers, he’s given up everything to achieve this win. He’s asked in the battle on Titan what his plan is once he accomplishes his goal, and he says it’s to retire to a quiet place and watch the sunset. And he does that at the end of the film. It’s literally the last thing that happens before the credits roll. But after everything that’s happened, it’s abundantly clear that there’s no way Thanos can live with the full consequences of his actions. Thanos doesn’t want to kill Gamora. But he does to get the Soul Stone. Because he knows that if he doesn’t, then all of his work will have been for nothing, and he can’t go back now. But this pain lingers in him, and it’s going to continue because as evil as he may be, there is more than just evil within him. It’s unclear how that will affect him in Avengers 4, but I’m willing to bet it does have a lasting impact, one that may be part of the key to defeating him in the next film.

The biggest thing that helps Thanos make such an impact on the MCU is the fact that he destroys it, killing many of our heroes. Within the first few minutes he kills the Asgardians. Killing Heimdall after he sends Hulk to Earth, and killing Loki after the God of Mischief tries to cut his throat, sacrificing Gamora, then killing half of the Avengers and almost all of the Guardians of the Galaxy with the snap of his fingers. The film essentially ends with the snap. And it’s shocking as we see our heroes turn to dust and blow away in the wind. Bucky, Falcon, Groot, Peter Quill, Mantis, Drax, Scarlet Witch, Black Panther, Doctor Strange, Spider-Man, are all gone. And Thanos disappears into a portal to his retirement home. It’s some seriously heavy shit, and if nothing else, watching Peter Parker die in Tony Stark’s arms is beyond heartbreaking.

But it means nothing. Not a single thing at all. We know that Marvel has greenlit a solo Spider-Man film. We know that there’s going to be a Guardians of the Galaxy Vol. 3. We know that a sequel to Black Panther has been greenlit. There’s been talk of a sequel to Doctor Strange. And all of the remaining actors who “died” when Thanos snapped his fingers, have multiple films still on their contracts with Marvel. The actors who are done after Avengers 4 are essentially all the ones left alive. Chris Evans, Chris Hemsworth, Robert Downey Jr., Scarlet Johannsen, all of them are done after Avengers 4. Which means they have to find a way to fix things, and possibly die in the process. Or some of them die in the process and the rest sign new contracts with Marvel. But either way, it ruins the dramatic weight of the film.

If the sides had switched. If Stark, Thor, Cap, Widow, Rhodey, all of the people who survived had died, it would make sense. We could sit here and say, man I have no idea who’s coming back and who’s not. This may be how things move forward. That the old heroes have just died. But having the newer heroes all die, means that something major, potentially time travel, has to happen in Avengers 4 to undo it all. It still hurts for now to see these heroes die, but in the end it’s hard to feel like it matters. All of that being said, I firmly believe we may have lost Loki, Gamora and Heimdall forever. That their deaths won’t be undone. And if somehow they are undone, it will feel like a serious cheat, and possibly a waste of what could have been an incredibly fantastic story. Overall the question going forward isn’t if we’ll see the characters that dusted away return, but how we’ll see them return.

The smaller archs in the film work incredibly well. Tony Stark starts the film talking with Pepper Potts about dreams of having a kid. Then he ends the film by watching the closest thing he’s ever had to a son die in his arms. Steve Rogers begins the film working in the shadows after he was abandoned by his country for trying to save his best friend, only to see his best friend turn to ash in front of him. Thor loses his brother, the last thing he believed he had in this life. But once he finally gets revenge and seems to kill Thanos, he still loses the war. Doctor Strange begins the film stating he will sacrifice anything and anyone to keep the time stone safe, and then hands it over to Thanos to save Tony. 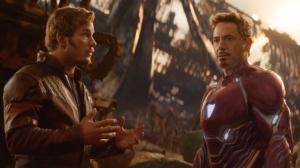 I also have to admit that in some ways I’m conflicted by the way the marketing worked for the film. I almost feel like too much was given away. Because overall the film has two parts, Thanos’ search for the Infinity Stones, and the Avengers fighting to keep the Stones safe. The marketing for the film was really good about keeping the Thanos side a secret. And overall I’d argue that that’s really the main plot of the film, and by doing so they were able to truly surprise the audience with how the film plays out. But showing so much of the Avengers side of things, the battles with the Black Order, the final battle in Wakanda, just made me feel like I saw too much at the end of everything. It made me wanting more at the end of the film, and not in a completely satisfying way.

The film is really fantastic overall, and there’s some nice twists and surprises, and overall the end of the film is one of the darkest endings ever seen on film. This is legitimately an Empire Strikes Back esque film. The ways Thanos uses the Infinity Stones are awesome, especially the reality stone. Those scenes are really incredible, and add so much more to the film. I honestly would have liked the film so much more if the deaths at the end were switched. However I am definitely invested in coming back for Avengers 4 to see how the remaining Avengers bring everyone back. Luckily we only have to wait a year for that to be revealed. 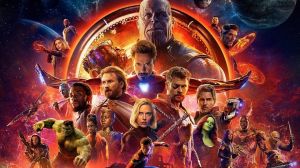 Lastly, I have to say I’m slightly surprised there was only one end credits scene. That being said, I think the scene was rather intriguing. It was good to see Nick Fury and Maria Hill, and learn how they were affected by Thanos’ snap. I also loved Fury’s final line. That and “I am Steve Rogers” are two of my favorite lines from the film. I’m intrigued to see how the nod to Captain Marvel will payoff in Avengers 4. It’ll also be interesting to see how Ant-Man and the Wasp will play into all of this. I’d be willing to bet that the film takes place before the events of Infinity War, and ends with Thanos’ snap.

Overall I’d give Avengers Infinity War an 9.5/10. It’s a solid film, with a great story, and some amazing moments. The fact that directors Anthony & Joe Russo, and writers Christopher Markus & Stephen McFeely, were able to construct a story to vast in scope and scale, and make it work successfully, is phenomenal. This is definitely one of the best Marvel films, and it’s set up Avengers 4 to be another home run, and quite possibly one of the best films of all time.