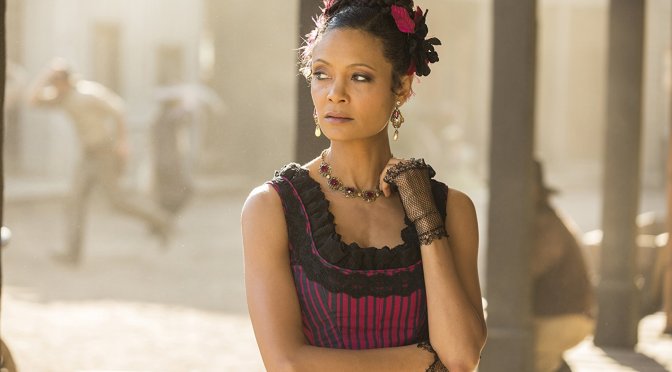 Leading up to the start of the second season of HBO’s hit sci-fi drama Westworld, we’re taking a look at the first season of the exceptional show. We’re going to dive into some Major Spoilers, so be warned now, because we’ve got a lot to talk about.

This episode essentially works to tie up things and prepare us for the final two episodes which will bring everyone together, and lead to a rather explosive finale. We start this episode with Ford and Bernard. Bernard remembers killing Theresa and is having a difficult time dealing with it. Ford calms him down and makes him clean it all up, destroying every bit of evidence that anything happened. He also wipes Bernard of any memory of a real relationship with Theresa. While talking with Bernard at the beginning of the episode Ford tells him that this is the only time this has happened. Yet Bernard has a quick vision of him choking Elsie, who was last seen being attacked by an unknown assailant in Episode 6.

Ford tells Bernard later in the episode that his questioning of his own reality is rather similar to what made Arnold lose his mind. The question of what consciousness truly is, and the possibility for it to be created. Ford explains that consciousness isn’t even real, that humans, like hosts, live in loops. That we are constantly looking to be told what to do. At the end of the episode, after Ford has wiped Bernard’s memory, Ashley comes to him and offers his condolences about Theresa. As head of security, he says it’s his job to know everything going on. With Bernard no longer having memory of their relationship, he states that there was nothing there. Ashley knows this is a lie, and asks Bernard about Elsie. Bernard makes a comment about her simply enjoying her time off and walks away. Ashley knows there’s more going on here, and there’s a good chance that he may be the key to revealing the truth of it all. 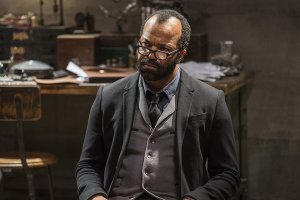 Meanwhile in the sublevels, Ford meets with Charlotte and Ashley and they discuss the death of Theresa. Ford, with Bernard’s help, has made it look like Theresa died trying to get data out of the park. He uses this to state that the Clementine demonstration was faked, and reinstate Bernard as his second in command. He also decides that Theresa’s team needs to be fired and that him and Bernard will rewrite all of the security protocol for the park. Charlotte has backed herself into a corner for now and has to agree to everything with Ford in order to keep things going smoothly.

Charlotte is still trying to get information out of the park, in case Ford decides to sabotage everything. She ends up meeting with Sizemore, who believes he’s creating the villain for Ford’s new narrative. She ends up telling him that Ford’s just giving him busy work but that she needs his help with something. They head down to the cold storage area and she has him wipe the old Peter Abernathy (Dolores’ father) host, and upload data from the park. She plans to find a way to remove the host from the park after the data is uploaded so that Delos, the company funding the park, can keep the data safe. 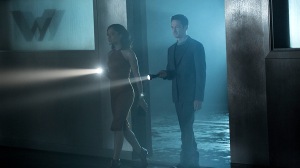 William and Dolores find a group of Confederados dead near the river. One of them is just barely alive and reveals to them that Logan has joined up and is searching for them. Dolores tries to save him, going to the river to get him some water, but she begins seeing things, sort of hallucinating. First she sees her own body lying dead in the water. Then she looks back to see William and the young Confederado gone. She comes back from it and brings water over to them, but the young man has died. They head out and find a small town, one she remembers, where someone is killing hosts. The murderer is revealed to be Dolores, she’s hallucinating again. She puts a gun to her head, and William stops her. He says they need to get her back to Sweetwater, and plan to head out but are found by Logan and the rest of the Confederados.

In a way the Maeve and Man in Black stories end up tying into one another this episode. The Man in Black and Teddy end up finding a massacre where the only person left alive is a woman, the same host that walked William into the dressing room when he first arrived at the park. The Man in Black is surprised to see her, and you almost have to wonder if Ford may have brought her out of cold storage. The Man in Black has been through the park many times, for over 30 years. If he’s surprised to see someone, there may be more to it than what’s on the surface given everything Ford is doing. Teddy begins to remember elements of his past stories, including the Man in Black dragging Dolores to the barn at her family’s home. 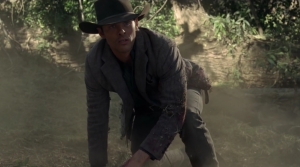 Meanwhile, Maeve works with Felix and Sylvester to get more control over herself and other hosts. She’s starting to remember more and more of her past, and it’s affecting her more as things come back to her. When hector and his men come into town, she tests her power by telling the sheriff and his men to leave them alone and kill each other. Later in the day she begins to sort of lose control of her mind as she’s reminded of what led her to being moved to the Saloon.

Teddy ties up the Man in Black, and begins to question him. He explains to Teddy that in the real world he’s a good man, a philanthropist, a family man, with a wife and daughter. But his life was torn apart when his wife supposedly killed herself, unable to come to terms with who he truly was. That while he seemed like a good man, she knew that there was darkness in him. A darkness that was opened within the park. So he came back to the park and decided to test himself. He found a woman and her child, and he stabbed the woman and shot the child. The woman fought back, cutting his throat. The woman was Maeve.

Maeve seems to reenact these moments in the center of Sweetwater. She hears two shots, like the two shots that killed her daughter. The new Clementine host comes to check on her and Maeve slits her throat, just as she did the Man in Black. We see that after the Man in Black killed her daughter and she cut his throat, she was still freaking out in the sublevels. That this situation, led Ford to completely change her story and place her in Sweetwater as the Madam working out of the saloon.  The Man in Black explains to Teddy that this exchange with her showed him who he was. Teddy calls him an animal but he says that an animal would have felt something. And he felt nothing. But in that moment, when she fought back he saw that there was something deeper here in the park. The maze was “revealed to him.” A pattern in the dirt outside of Maeve’s house. 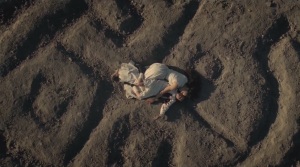 He tells Teddy that in Ford’s game Teddy can’t kill him. But there’s a deeper game, “Arnold’s game. And that game cuts deep.” Ashley is told in the sublevels that something is wrong with Maeve and he has the techs bring her in. The Man in Black tells Teddy that the maze is all that matters. The female host tells Teddy to kill the Man in Black but he can’t. Teddy is shot by an arrow, and it’s revealed that the woman is working with Wyatt. That Wyatt wants Teddy. Wyatt’s men emerge and they’re going to take the two men to him.

This episode ends with a lot left open. We know that there’s a lot of deeper issues in the park than had even been revealed before this. Maeve’s actions towards the Man in Black in the past, Dolores’ hallucinations while she was with William, Teddy remembering previous encounters with the Man in Black, all show that whatever is going on with the hosts has been going on for years. The question behind all of this has to be, what aspects of it are left over from Arnold and what may be Ford’s doing? The other big question from this episode is how Ashley will move forward. He obviously knows something is up with Bernard, but will he be the one to uncover the truth behind his identity?

That’s all we’ve got for now, but with only two episodes left, things are about to get really intense. Stay tuned to Poor Man’s Spoiler as we finish out our Season 1 Recap of Westworld leading up to the premiere of Season 2, this Sunday on HBO! 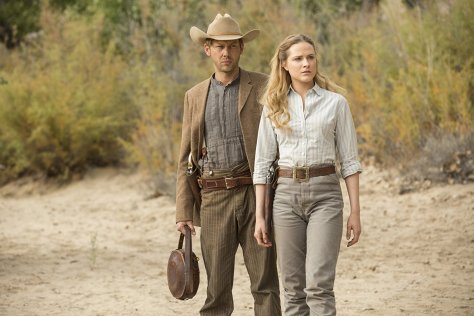