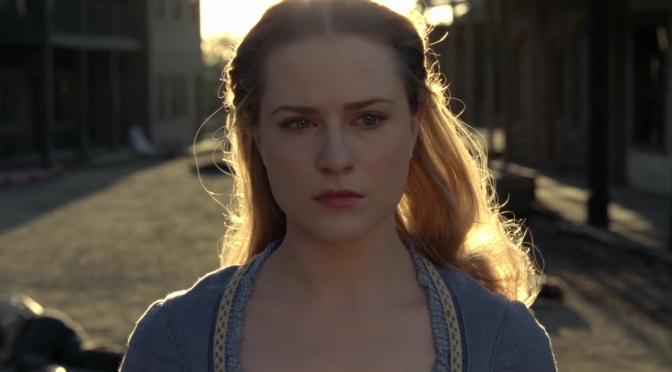 Leading up to the start of the second season of HBO’s hit sci-fi drama Westworld, we’re taking a look at the first season of the exceptional show. We’re going to dive into some Major Spoilers, so be warned now, because we’ve got a lot to talk about.

As the episode starts we meet William (Jimmi Simpson). A man visiting Westworld for the first time. William is visiting with his soon to be brother-in-law, Logan (Ben Barnes), who has seemingly frequented the park. Through William we see how the guests enter into the park. They come from a monorail and are led through a welcome area and into a room where they choose their outfit. Before they leave for the park they choose a white hat or a black hat. Essentially a way of saying what kind of path they’ll be on. He chooses a white hat. He walks into a room with a bar. Followed by Logan. He asks how they get to the park and the room shakes. They’re on a train car heading straight to the center of the park, to Sweetwater. They arrive and Logan explains to William that each host has some big adventure to sell you on. Logan shows throughout the episode that he’s really not a good person. That he’s just there to be free to do the things the real world won’t let him. William on the other hand is a good person, and continuously holds back and refuses to take part in the things Logan suggests.

The trick here, and this is where we get into MAJOR SPOILERS, is that this isn’t how thing stay. By the end of the season we learn that William is the Man in Black at a younger age. That this was his first visit to Westworld, he fell in love with Dolores, lost her, and has been coming back ever since. In the real world he may still be a seemingly good person. But here, after everything that happens to him on that first trip, he goes dark. At the end of the episode Sizemore, presents a new storyline for the park. But Ford denies it. Sizemore wants to give the guests an experience that is just face, bad people come after you, good people help you. But Ford explains that the park isn’t about that. Sizemore says the park helps people find who they are. Ford says, the park isn’t about who a person is, it’s about guests being able to do what they can’t in the real world.

Over the course of the episode we see Ford doing some intriguing things. He goes into the park and explores an uninhabited area, and talks to a young boy roaming through the desert. Later in the season we come to find that the boy is a younger version of Ford made for the park. But what he’s looking for is a center place for his new narrative, which he begins work on at the end of the episode. Leading up to that reveal, he also talks with Bernard, explaining that there’s more to what they do here. “We practice witchcraft. We speak the right words. And we create life itself out of chaos.” Once again, a clue to the fat that the phrase “these violent delights, have violent ends” means something more.

Elsie speaks with Bernard and says that she knows there’s more to what happened to Abernathy than what they said. That he wasn’t just remembering old narratives somehow. But Bernard repeatedly shrugs it off. Theresa shows up at Bernard’s place and we learn that they are sleeping together. Another BIG SPOILER here, but there’s a moment after they sleep together where they are lying in bed talking about the hosts. Theresa mentions that it’s ironic that Bernard’s hosts talk so much while he’s usually so quiet. He explains that they talk in order to learn more, to be come more human. She asks if tonight he’s talking more to become more human and he laughs and shrugs it off. But there may be truth to that. As we learn in the later portion of the season, Bernard is in fact a host created by Ford to replace his old partner Arnold.

Man in Black meets up with a host named Lawrence as he’s about to be hung. He kills his captors and heads to Lawrence’s hometown. He comments that he knows Lawrence well, has gone on many advnetures with him, even knows the song he whistles when he takes a piss. But never knew til now that he had a family. He knows Lawrence knows something about the maze, but doesn’t know what. He kills Lawrence’s wife and then the daughter tells him the maze wasn’t meant for him, but gives him a clue to finding the maze. During all this a security agent asks Ashley, the head of security, if they should slow down the Man in Black. He says no, and that the Man in Black gets whatever he wants at the park. When it’s revealed at the end of the season that the William is the Man in Black he says he wants to invest in the park. The question is, how much has he invested over the past 30 years to where he can do anything.

Delores begins remembering something from her past. While walking through Sweetwater, she runs into Maeve and tels her, “these violent delights have violent ends.” From this point on Maeve begins to have issues. She starts seeing things, memories of a past narrative, and it throws her off. At first she’s brought in and they up her aggression, but she’s still off. Elsie inspects her and just resets her to her usual settings, not finding anything abnormal. But when she goes back into the park, she’s still remembering things. Nightmares of an old narrative, where the Man in Black killed her and her daughter. She ends up getting worked on by two lab techs Sylvester (Ptolemy Slocum) and Lutz (Leonardo Nam). During which she wakes up from a nightmare, escapes from the room, goes to an “exterior area” where we see that the facility is built into the side of a mountain or cave, then heads into another area on that floor, and sees where they clean the hosts’ bodies when they come in from the park. Lutz and Sylvester inject her with something to knock her out and that’s that.

There’s a lot to take in from the Maeve situation. For one, no one finds anything wrong with here. Just like they didn’t with Dolores. Which means the “violent delights” phrase links to something that is very well hidden. But well hidden by who exactly, we don’t know. It could be Ford, especially given the way the season ends as his new narrative finally begins. Or it could be remnants of Arnold’s work,coming back to haunt Ford and the everyone at the park. The other interesting element is the clue to where the park is. When we see Maeve head out to the “exterior” sort of area, where we see the facility built into rock of some kind, this is one of the biggest clues to where the facility and the park is truly located. It leads to believe that the park is probably underground or inside some sort of mountain somewhere. But once again, we’re still left with a lot of questions.

One other element we see in this episode that we haven’t seen before, is Bernard talking with Dolores. Now each of these conversations are edited in a way where it makes sense, but it still questions as to why it’s happening. It leads us to believe that Bernard is doing something here. But knowing that Bernard is a host version of Arnold means that these interactions, have to be between Dolores and Arnold, not Bernard. And watching them it makes sense. Nothing Arnold says matches up with what Bernard would say in these talks, or in these moments in the storyline. Bernard is asking questions, a lot of questions, because he’s uncertain of very specific things. Arnold is uncertain of very specific things as well, but none of those match up with what Bernard is questioning. They’re just two men, on two similar paths, searching for answers to questions they may not want answered.

At the end of the episode Delores wakes up in the middle of the night. Walks out into the yard in front of her house. She stops and asks, “here?” Then uncovers a gun in the dirt. It’s not clear who she’s talking to or why just yet. But the next episode does get into this a bit, it also begins the steps towards Ford’s new narrative. “Something quite original.”

That’s it for the second episode of Westworld Season 1, “Chestnut.” But be sure to keep following Poor Man’s Spoiler for the rest of our Westworld recaps and more leading up to the premiere of the second season on Sunday April 22nd, only on HBO.

If you haven’t yet you can check out our previous recap at the link here: