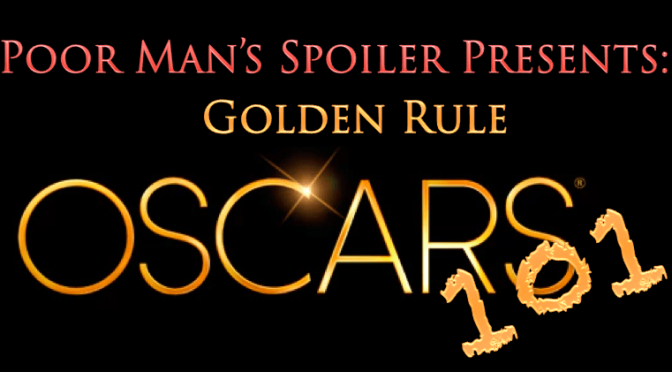 It’s the most wonderful time of the year, OSCAR SEASON! Over the next few months we’ll have tons of coverage on what films may get nominated this year, what chances the nominees have and much, much, more. We’re starting our Oscar Season Coverage with a rundown of how the Oscars work.

The Academy Awards or Oscars are given out each year by the Academy of Motion Picture Arts and Sciences. They give out awards for the best of the best in just about everything related to film. For a film to qualify for an Oscar it has to be presented sometime in the Calendar year in Los Angeles Count, California and play for 7 consecutive days. (Except Foreign, Documentary and Documentary short, those have different rules which we’ll get to in a second) This LA qualifying is why you’ll sometimes see that a film is advertised as being “in select theatre” in one date and then “everywhere” on another date. Some films will release in California at the end of a year and then wait a few weeks or a month or two for Oscar buzz to hit before they expand nationwide, that way they can boost ticket sales.

Foreign Language films do not require a US release, and are nominated by their native country for the category and then nominations for the Oscars are narrowed down by a specific board of members. Documentaries must be screened for a week in both Los Angeles County and New York City. Documentary Shorts can qualify if released between September 1st of the previous year and August 31st of the current year. (So this year would be anything out from 9/1/2016 through 8/31/2017) They can also qualify by having a week long theatrical release in LA County or NYC, winning an award at an “Oscar Qualifying Festival” or winning an award in the Student Academy Awards. 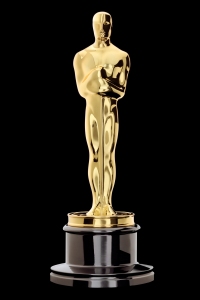 For the most part the Oscars are voted on by their respective Academy members. Actors vote for Actors, Directors vote for Directors, etc. Best Picture however is voted on by every member of the Academy. Membership to the Academy is offered to anyone who is given a nomination or to any person who is nominated for membership by two individuals in the same branch of the Academy. For example, Spielberg and Tarantino can both invite a director to the Academy and she would then accept or decline membership. Members are split into 17 branches and a member can only be part of one branch. If their work does not apply to one of the branches they can be considered a member at large. The branches are Actors, Casting Directors, Cinematographers, Costume Designers, Designers, Directors, Documentary, Executives, Film Editors, Makeup & Hairstylists, Music, Producers, Public Relations, Short Films & Animation, Sound, Visual Effects, and Writers. Once the nominees are chosen every single Academy member votes for the entire ballot. Spielberg gets a vote on Costume Design, Hanks gets a vote on Sound Mixing, Nathan Crowley gets a vote on Lead Actress, etc.

Now while some of the Categories are obvious some of them might not be clear if you aren’t as well versed in the industry. What is Sound Mixing and how does it differ from Sound Editing? What’s an Adapted Screenplay? Let’s run through each category.

Picture
The film itself. The Producers of the film take home this award. (ex. Moonlight)

Lead Actor
The Male star of the film. (Leonardo DiCaprio in almost every film he’s been in)

Supporting Actor
Any Male Actor who doesn’t get top billing on the film. (Everyone dude except Leo in almost every movie he’s in.)

Supporting Actress
The Actress with the second biggest role in the film. Although more often in recent years, the award has gone to an Actress in the largest female role in a film that is considered an Ensemble piece or to the lead female in a film that is referred to as more male focused. Anne Hathaway won for Les Mis, Patricia Arquette won for Boyhood, Alicia Vakander won for The Danish Girl, Viola Davis won for Fences, all three of those could have been considered Lead Actress in the respective films.

Best Animated Feature
Pixar or Disney movies that aren’t sequels, usually a foreign film and then some other animated film or two. Also of note here, the Oscar goes to the Directors of the film. Which is part of the reason why Director George Miller (Mad Max, Babe) has an Oscar… for the film Happy Feet.

Best Animated Short Film
The shorts before Pixar films, and other animated shorts that you might catch online from time to time. These are some of the hidden gems of the Oscars, if you get the chance to watch any nominated films, do it. One of my favorites is World of Tomorrow, which you can catch on Netflix.

Best Cinematography
This goes to the Cinematographer, aka the person who makes the film look good. If you see a shot of a film that is perfectly composed and you think, I want a poster or print of that hanging on in my living room. You can thank them.

Best Costume Design
This isn’t just Batman or Iron Man’s suit. This is the clothes of every person seen on screen. If you see a period piece and think, man even the person standing way off in the distance with no interactions with Judi Dench and/or Kiera Knightly, has amazing clothes! That’s them.

Best Documentary Feature
Feature Length Documentaries. There have been some really outstanding documentaries nominated in recent years including 13th, What Happened, Miss Simone?, Cartel Land and Winter on Fire. But the winners lately tend to lean towards what’s more “well known” or the so-called “sexy choice.” (Ex. Amy winning in 2015. It’s a great film, but if I had voted I don’t know if I would have chosen it.)

Best Documentary Short Subject
These are documentaries that are roughly under an hour in length. They can be five minute pieces, or 30-40 minutes specials you’d see on PBS. This is another hidden gem each year, but many of the nominees tend to get picked up by HBO or PBS or some other channel if you’re interested in checking them out.

Best Film Editing
The hero’s car is hit, the screen cuts to black, you see a shot of the wreckage and then the hero wakes up. The heroine is trying to accomplish something. You see a montage of her struggles and achievements. It’s synched perfectly to the music. This is the editor’s doing. They take all the different takes of a film (which may be a lot, talking to you David Fincher) and sort it together into something that makes sense and looks good.

Best Foreign Language Film
Films aren’t just made in Hollywood. There are filmmakers from all across the globe. When a film from another country raises to fame in said country, it can be nominated by a film board to become The Film from that country that is the best of the best. And from there potentially be nominated for best Foreign film. These films aren’t often widely seen by American audiences, and in all honesty can sometimes be hard to find in the US in any form unless they get picked up by a TV network like HBO. That being said, these are still amazing films. (One of my favorite films of the past few years is Mustang, which was nominated at the 88th Oscars.)

Live Action Short
These are often films seen at festivals or online that are fictional stories told in less than an hour.

Makeup and Hairstyling
This is where some of the Blockbuster films start to come in. For example, Suicide Squad won last year. It’s not just about the makeup on a actor’s face; prosthetics and such for aliens or elves or other imaginative creatures are taken into account. Another key here can be films that recreate a classic character or something well known/historic. (The Iron Lady which was about Margaret Thatcher won in 2011 and Suicide Squad which won last year recreated the look of the Joker on film.)

Original Score
You know those moments in film where the stakes are rising, and the music, not songs with lyrics, but pianos and violins and trumpets and drums, all swell and you feel moved to tears or are gripping onto the edge of your seat. That’s the score. Any new music created for the film, that adds to the thematic tones within. Best Example, the opening scene in UP. There’s no words. Just images and music. And it shows you everything and makes you feel everything. And because of that Michael Giacchino won an Oscar.

Original Song
Let It Go from Frozen. How Far I’ll Go from Moana. Lose Yourself from 8 Mile. Skyfall… from Skyfall. Any song, with lyrics, created specifically for a film. (Other Oscar Nominated artists include: Sting, The Weeknd, U2, Seth MacFarlane, M.I.A., Dolly Parton, and Trey Parker. Other Oscar Winners include: Bob Dylan, Springsteen, Bret McKenzie and Frayser Boy, Juicy J & DJ Paul.)

Production Design
The Production Design team is responsible for the world created on screen. If a film is set on a different planet, or in a different time, or in some sort of truly fictional world (Harry Potter, Lord of The Rings, Gotham City), the look of these places is created by the production design team. They design, build, and fully create everything. Even the props and vehicles. If a film is set in the 50’s it’s their responsibility to make sure everything is accurate. From 1950’s cars, to the exact type of coke can or television that would be used.

Sound Editing
What does it sound like on other planets? If you have an idea based on something you’ve seen in a film, this is your category. This goes to the people who create the actual sounds of the world of the film. From the sounds of characters walking through snow in the winter or punching a villain in the jaw, to the crunch of a boat as it’s destroyed by the sea. These are the people that make everything sound right. (Ex. Javert’s death…)

Best Visual Effects
This category may sometimes seem simple and obvious. Explosions. CGI characters. Green screen. But sometimes it means more. In 2014 Interstellar had to create the imagery of black holes. In doing so they created computer models that helped scientists reassess what they knew about Black Holes. They literally helped change rocket science and the things we know about the way the universe works. So they got an Oscar.

Original Screenplay
This goes to any script that was a completely original story. Manchester by the Sea, Inside Out, Birdman, Inglourious Basterds, Up, Wall-E.

So what’s going to be nominated? Well studios are already campaigning via “For Your Consideration” websites, and ads asking Academy members and other groups for awards season to consider nominating their films. And buzz has been building already for many films.  But we won’t know who gets nominated until January 23rd. And we won’t know who wins until the official Oscar ceremony airs on ABC on March 4th. Until then be sure to check in with us as we take a look at what films might be nominated. Who deserves to be nominated. And much more! And be sure to keep an eye out after the nominees are announced as we attempt to watch every single nominee and then take a look at who stands the best chance at taking home the gold on Oscar night. 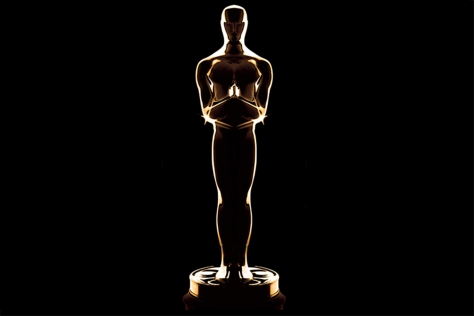 Written by Alex Lancaster
(Alex is a life long film fan, and has dedicated his life to watching, making and obsessing over films. He thinks Justice League was good film, and despises Avatar. He has a 3 year old son. And a bad habit of saying more than he needs to. Follow @alex5348 on Twitter)