Nickelodeon has been working hard lately on cashing in on the growth of 90’s Nostalgia. Last year they premiered a made for TV movie based on the popular game show Legends of the Hidden Temple. And up next they have two TV movies based on Rocko’s Modern Life and Hey Arnold. They premiered trailers for both films at Comic Con and we have them here as well as some other information on both projects. 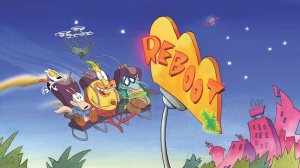 Modern Life: Static Cling begins with Rocko and his two best friends Heffer and Filburt returning to Earth after spending 20 years trapped in space. While Heffer and Filbert are more than willing to accept, and conform to a 21st century full of Food Trucks, 3D Printed comics and Radioactive Energy Drinks, Rocko seems less pleased. The special brings back the entire original voice cast as well as series creator Joe Murray.

As for details on the special, they didn’t reveal any specific plot points. They did however state that Filbert is extremely obsessed with social media. Given that he was the epitome of introvert, it’s not that surprising. They also said that at first they were hesitant to go back to the series. Wanting to do it for a purpose and not just because Nickelodeon asked them to. When creating the new film they also made sure that it was done in true classic fashion, aka hand drawn animation. The entire special is hand drawn with hand painted backgrounds. Just one more reason to be excited for the new special.

As of now we do not have an official release date, but Rocko’s Modern Life: Static Cling will hit Nickelodeon sometime next year. Here’s the first trailer for the show which appears to be the first few minutes of the special.

Next up is Hey Arnold: The Jungle Movie. Everyone’s favorite football headed kid is back with a special that sees him and all of his friends on a search to find out what happened to his long lost parents. His friends band together to help him win a trip to San Lorenzo island, the very island they went missing from years ago. Much of the rest of the story is being held under wraps, but there were some interesting bits of information released at the panel.

have grown to where their voices have changed too much to portray the characters. Mason Vale Cotton will take on the role of Arnold and Benjamin Flores Jr. will play Gerald. (And judging by the trailer, you’d never know the difference.) Toran and Smith do have other roles in the film, though they have not yet been revealed. Craig Bartlett, the show’s creator explained that they did their best to bring back as many characters as possible. They also wanted to answer as many of the show’s fans’ lingering questions as possible. Two big questions that get answered in the film are Arnold’s Last Name and the actual fate of fan favorite character Pigeon Man. (A theory that Pigeon Man committed suicide has been going viral lately on the interwebs, the truth of his fate is actually revealed in the first teaser.)

As of now Hey Arnold: The Jungle Movie does not have a firm release date, but will air on Nickelodeon sometime next year. Check out the trailer below and revel in the bliss of all this 90’s nostalgia for just a few moments more.