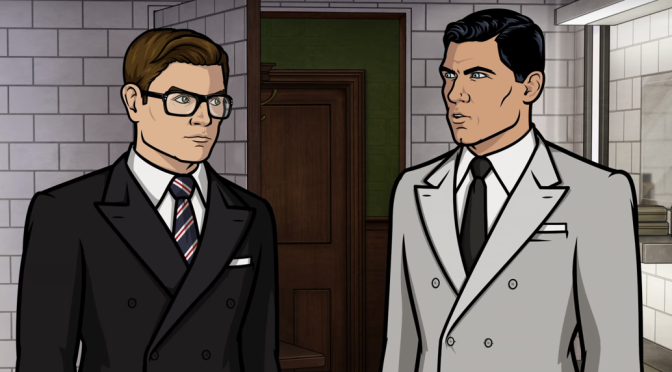 The first big panel for Comic Con 2017 was for 20th Century Fox’s Kingsman: The Golden Circle. The panel begin with an animated clip featuring Taron Egerton’s Eggsy running through the streets of London, eventually arriving at the Kingsman tailor shop where he is greeted by none other than Sterling Archer from the hit FX series Archer. Fox has released the clip online through the official Kingsman twitter account and we’ve embedded it below. If you enjoy Archer or the first Kingsman film, I think you’ll get a kick out of this.

The rest of the panel consisted of questions and comments from the cast and crew which included Taron Egerton, Colin Firth, Channing Tatum, Pedro Pascal, Jeff Bridges, Halle Berry, Screenwriter Jane Goldman and comic book artist Dave Gibbons. The highlight of which being when all of the panel took drinks of “Statesman Bourbon” which ended with Halle Berry chugging an entire pint’s worth.

Intermittently during the panel, clips from the film were revealed. The first of which was 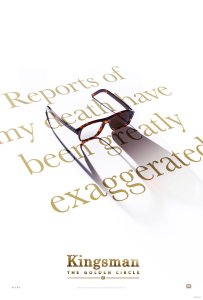 the opening sequence for the film. Eggsy emerges from the Kingsman Tailor shop to find rejected Kingsman recruit Charlie there on a mission from another organization. After realizing he’s up to no good, a brawl and car chase ensue that is one part Bond and one part Wylie Coyote (in classic Kingsman fashion). The second clip introduces us to the Statesman world as Eggs and Mark Strong’s Merlin enter the Kentucky Distillery that front’s the Stateman’s headquarters. After Channing Tatum’s Tequila scolds them for spilling out some of their fine alcoholic beverages,  he proceeds to wipe the floor with them in a fantastic fight sequence. The third and final clip introduced Julianne Moore’s villainous Poppy, the constantly smiling-Martha Stewart-esque leader of the drug cartel, The Golden Circle. We see that Poppy has set up shop in a 50’s inspired town with her two robot dogs Benny and Jet. While her smiling and cheerful expression paints her as someone who could give you an excellent casserole recipe, when she decides to throw one of her henchmen into a meat grinder and turn him into a burger, it becomes clear that she’s the perfect type of sadistic villain for this world.

One of the biggest surprises from the panel is the fact the 20 Century Fox did not bring out anything concerning the X-Men and focused solely on Kingsman. As we stated earlier in our rundown of what to expect from comic con this year, Fox would be smart to show at least something from one of the upcoming X-Men films.  Deadpool 2 and New Mutants are both coming out before the next Comic Con and the next film in the primary X-men storyline, Dark Phoenix is coming out November of next year. While Deadpool can succeed with out the Comic Con Hype, New Mutants could use the bump, and Dark Phoenix could really use some positive press considering many were disappointed by the last installment, X-Men Apocalypse.

There’s still a possibility of the 20th Century Fox may end up bringing the X-Men to Comic-Con with panels planned for both TV shows Legion and Gifted which are based on X-Men properties. The most likely of this is probably gifted which is believed to take place in the X-Men cinematic universe. We’ll see how things play out over the next few days and update you once we see how those panels play out.

As for Kingsman The Golden Circle, you can check out the new trailer that was dropped this morning right here. And we’ll continue to keep you posted on any updates leading to the film’s release on September 22nd. 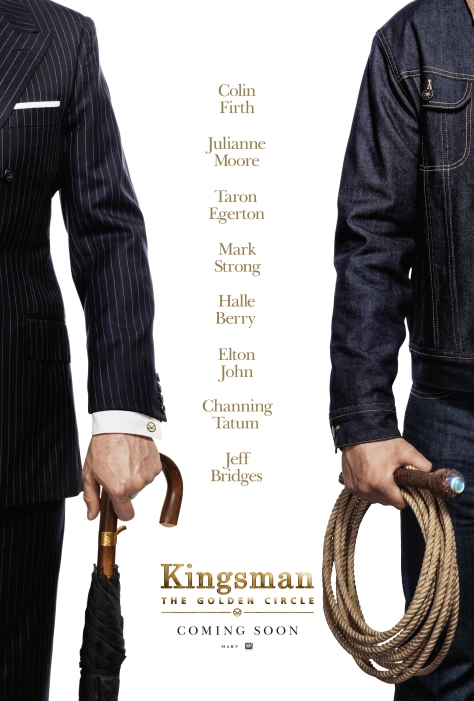